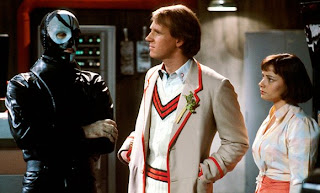 Who50 counts down to the 50th anniversary of Doctor Who by reviewing my favourite episodes and serials over the history of the programme, counting down from #50 to #1. Today, #7: "The Caves of Androzani", a four-part 1984 serial written by Robert Holmes and directed by Graeme Harper.

Everybody dies. No one knows this more keenly that the Doctor, who's died at least 10 times already. Nowhere is the finality of regeneration felt more keenly than in "The Caves of Androzani", a four-part serial from 1984 that presents the final adventure for Peter Davison's fifth Doctor. Shortly into the first episode he and his companion Peri expose themselves to a toxic substance called spectrox. From there on in they are both dying. This serial, one of the best bits of Doctor Who ever produced, is pretty much the bleakest, darkest and most relentlessly miserable story the TV series ever had, because everybody dies. Even the Doctor.

Okay, so that's a slight exaggeration. Peri is saved and lives to fight another day. The President of Androzani Major has a secretary who lives. Apart from that, every character in "The Caves of Androzani" dies. They are shot, or fall down open elevator shafts, or a killed by a giant lizard, or - in the case of many - are boiled to death in searing-hot mudslides. It's quite shockingly violent for a 1980s family television drama - so violent, in fact, that Australian television censored parts of the final episode for years.

There are stories where nobody dies, and the Doctor successfully saves everyone from some terrible menace. There are stories where a lot of people die, but the Doctor manages to save a small group of strangers from the terrible menace. There are stories - particularly during the early years of the series - where the Doctor isn't out to save anybody, but simply wants to escape the situation with his and his companions' lives intact. "The Caves of Androzani" is none of these stories: the Doctor is a dead man walking, and knows it, and every ounce of strength left in his body is devoted to simply saving the life of 19 year-old American college student Peri Brown. He's driven by compassion, of course, but also guilt - his curiosity led them into peril, and he'll be damned if his own shortcomings are the cause of her death. The final episode in particular is a masterpiece of television drama. It begins with a spaceship crashing into a desert, and the Doctor sprinting from the wreckage in a hail of machine gunfire, and he doesn't stop running until Peri is safe and he lies dead, his body transforming into new life as Colin Baker's Sixth Doctor.

This is the final Peter Davison story in my Top 50. In total I listed three: this serial, "Kinda"at #15 and "Snakedance" at #38. In many ways it's a very mediocre era for the series, particularly in his middle year (Season 20), but I remember almost all of it fondly. Davison's performance as the Doctor is perhaps the most underrated of all 11, because he's remarkably subtle. While he wasn't outrageously well served by the scripts during his tenure, he certainly hit the jackpot with his swansong.
Posted by Grant at 9:40 AM