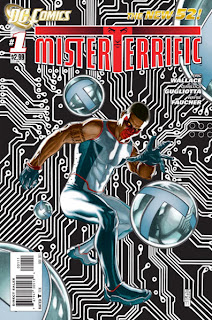 Oh Mister Terrific: it seemed like I was the only person who liked your comic. A former member of the Justice Society of America, spun out into his own solo title for the first time, given a chance to blossom into a solid second-tier superhero but instead consigned to oblivion. Sort of. I think they've thrown him over into Earth 2 so he can hang out with his JSA buddies again. No matter: he's gone, and I for one lament his comic's passing.

Truth be told there was nothing particularly exceptional about Mister Terrific, but it was solid and well written and had competent if not outstanding artwork. In the early months of the New 52, however, with Wonder Woman falling from superheroics into Greek mythology, the Joker having his face carved off in Detective Comics, the Justice League acting like assholes and Aquaman constantly having to demonstrate "no really, guys, I'm awesome!" to his already on-side readers, Mister Terrific felt like a breezy wind of fresh air. It was a superhero comic, with a reasonably well-adjusted guy with cool powers fighting colourful supervillains. Sometimes that's exactly what I want from a superhero comic. 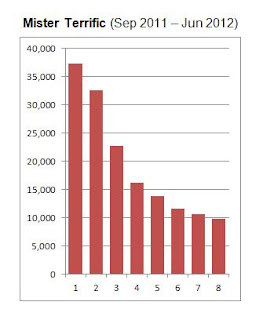 Looking at the sales figures, however, and I can not blame DC for cancelling it at eight issues. This comic sold like a broken elevator in a mineshaft, plummeting further and further down the charts with every instalment. It started at about 37,000 readers, which is fairly reasonable for a debut by a lesser-known character, and then shed 13% of them in a month. By issue #3 sales were 39% down from the launch, the next month they were 57% down, then 63% down. By the final issue in April 2012 Mister Terrific sold less than 10,000 copies.

It would be easy to chastise DC for cancelling yet another solo title featuring a hero of colour. It doesn't help that DC cancelled Static Shock the same month. On the other hand, at least they tried, and knowing DC they'll probably try again in the future. With Mister Terrific, or with somebody else. The trade paperback has been released, conveniently collecting all eight issues in a single book. It's decent superhero fun.
Posted by Grant at 5:09 PM