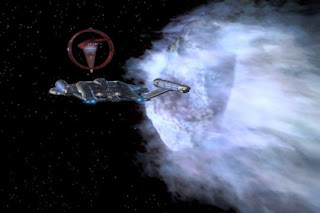 The Enterprise encounters a comet in deep space containing a rare mineral that may be worth mining. While the crew investigates, the Enterprise continues to be trailed by a Vulcan starship whose captain seems more than a little interested in the humans' activities.

I've written before about how the Vulcans of Enterprise seem a rather unlikeable bunch, and "Breaking the Ice" continues to explore this trend. In "Broken Bow" we discovered that the Vulcans had limited human space travel as much as they could for several decades. Here we discover that, even after allowing the Enterprise to roam freely through the galaxy, the Vulcans are still keeping a slightly paranoid eye on the humans. It works here, because they use the growing tension as an opportunity to develop T'Pol's character arc, and lead her to make a significant choice in whether her primary loyalty lies as a Vulcan or as the first officer of the Enterprise. 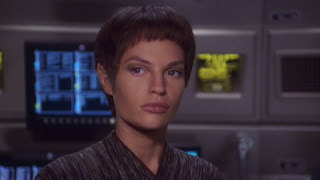 T'Pol reminds me an awful lot of Seven of Nine from Star Trek: Voyager. In both cases it seemed the actress (Jolene Blalock and Jeri Ryan, respectively) were hired exclusively as eye candy for a male gaze. Both have form-fitting jumpsuits that seem unnecessarily tight, a particular figure and facial appearance, and so on. It makes them easy targets for cynical observers; I recall one of the main elements to receive criticism when Enterprise originally aired was a scene of Trip and T'Pol rubbing disinfectant gel over each others' half-naked bodies in "Broken Bow". The thing these critics often overlook is that both Blalock and Ryan act their form-fitting socks off in their respective roles, and in both cases the writers rise to the challenge and give them some genuinely meaty characterisation to work with. Blalock's become a real standout in Enterprise. Her final scene in this episode is beautifully written and played, and advances her character significantly.

Reed and Mayweather finally get something to do - it's only taken seven episodes for the production team to realise the characters are there. Here they not only get the chance to do something productive, but they manage to generate a lot of comic relief as well. They still feel like fairly unnecessary characters, though.

All up, this is an episode worth watching. It's not perfect, but it develops the characters and the narrative nicely and is possibly the first-ever television drama to showcase two grown men building a snowman on the surface of a comet. Four out of the first seven episodes have been enjoyable so far, so Enterprise Season 1 scores 57%.
Posted by Grant at 7:26 PM