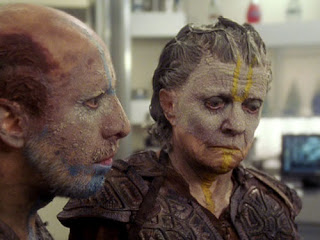 The Enteprise travels to the former Earth colony of Terra Nova, contact with which collapsed 70 years ago. They discovered an isolated, radioactive ruin and a vanished colony - but they may not be as alone on the planet as they think.

"Terra Nova" isn't a very good episode. For starters it seems based on a ridiculous premise: a human colony lost without contact for 70 years, and no one ever bothered to investigate? It seems ridiculous that, even if they stayed on Earth themselves, the human government did not even persuade the Vulcans to send a starship past for a quick look. I usually avoid complaining about entire texts based on illogical plot points, but this one seems a little too big to avoid. As a result, Archer and his posse travel to surface in a shuttle completely blind to what's happened. The situation beggars belief.

There is a point early on, when the away team uncover a group of cave-dwelling primitives, that the episodes picks up quite a bit. Their initial appearance is rather frightening, and it seems like the episode might become quite a tight little thriller. It doesn't. Almost as soon as they're encountered, the primitives are revealed as the descendants of the original human colony. The episode then becomes a matter of convincing these descendants to relocate someplace else before the residual radiation kills them all.

It's all very generic for Star Trek, and as a result eminently missable. I did brighten up with the arrival of guest star Erick Avari, who is a mainstay of cult film and television. He's easily recognisable from The Mummy, Stargate (and its TV spin-off), Daredevil, The West Wing, The X Files, Babylon 5 and Heroes. Indeed, he has already appeared in two other series of Star Trek (The Next Generation and Deep Space Nine). It's always nice to see him, but here he seems vaguely wasted. Indeed, everyone seems fairly wasted.

On a binary thumbs up/thumbs down scoring system, "Terra Nova" is pretty easy to categorise. It's simply not that good. So we're now up to two good episodes out of the first five, or 40%.
Posted by Grant at 5:09 PM