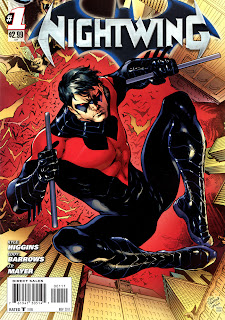 I've always been a fan of Nightwing, pretty much from its launch as a solo title all the way back in 1995. There's something very appealing about Dick Grayson as a character. I think he brings with him a lot of the appeal of Batman - dark city streets, urban vigilantism, and so on - but he's also allowed to be fallible. Dick is a regularly troubled guy. Unlike his adoptive father Bruce, Dick manages to find time for a romantic life - which he regularly screws up. He works the same dark territory as Bruce, but manages to keep a brighter disposition. It's a wonderful character, and I wish Warner Bros would bite the bullet and give him his own film franchise. Or his own cartoon. Or a TV show. Whatever. I want more Dick. (Another selling point of the character: there's nothing more fun to an adolescent mind than to vocally brag about one's deep abiding love for Dick.)

Since the New 52 relaunch Nightwing has been coasting along pretty much on a par with its pre-reboot incarnation. I think, all in all, there's been a marvellous consistency to this title for the past 17 years. Some writers have been better than others, but Nightwing has always been a worthwhile, enjoyable read. I'm particularly impressed that this new volume of the series hasn't missed a beat, tonally speaking, despite the first volume actually ending in February 2009 in the aftermath of the Batman RIP saga.

Keep that in mind when we're looking at the stats: there's a 30-odd month gap between the blue issues and the red. 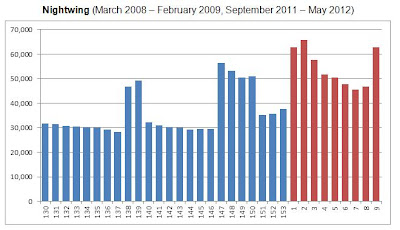 Like Legion of Super-Heroes, I think there's a perennial base audience for Nightwing, and in this case it's about 30,000 people. The two big sales bumps you can see in the volume 1 issues are tie-ins to The Resurrection of R'as al Ghul and Batman RIP.

Jump forward two and a half years, and Nightwing suffers a quite rapid decline in sales following its first two issues. In May 2012 it got a fresh sales bump thanks to a Night of the Owls tie-in issue. It's when you look at the sales figures that it becomes clear why DC are so fond of Bat-Universe crossovers - it's straight-up money in the bank every time.

Now if DC can somehow keep Nightwing's monthly sales hovering around the 45,000 copy mark, I think it will be a major achievement for them. That said, my gut tells me those sales are going to keep declining post-Owls, until we're back to a steady 30,000 readers again. And to be honest, that's no bad thing. We 30,000 readers really like Dick.
Posted by Grant at 9:39 AM