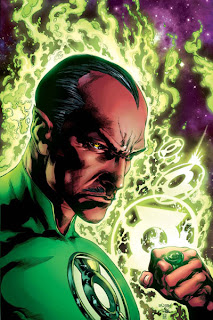 Some of DC's superhero lines were completely rebooted when the New 52 hit (such as Wonder Woman and Superman), while others managed to emerge through the reboot relatively unscathed. It all came down to sales: if you were selling like hotcakes already, why change things? Under the leadership of writer/chief creative officer Geoff Johns, Green Lantern was a comic that was already consistently selling more than 70,000 copies a month, so DC by-and-large left this corner of the universe alone.

This one I can't actually judge based on its contents, as I haven't read a single issue of Green Lantern since their big line-wide crossover "Blackest Night" a year or two back. By that point it felt like Johns had dragged the franchise so far up its own arse it simply wasn't quite making sense to me any more. The Sinestro Corps? Pretty cool. Separate armies of space people colour-coded like the United Colors of Oa? Not very cool at all. Since DC made it very clear during the lead-up to the New 52 that Green Lantern was going to be mostly unchanged, I made the choice not to bother reading it.

So how has an "ain't broke/don't fix" strategy helped Green Lantern through the New 52? 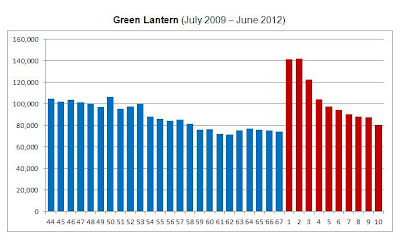 The sales pretty much demonstrate what happens with a title like this. It has a large, hard-core following, gets relaunched with a new issue #1 and has a massive spike in sales, and then very rapidly settles down to the same hard-core audience it already had. The New 52 hasn't hurt Green Lantern's sales in the slightest, but the choice not to reboot or restart certainly hasn't helped its sales either.
Posted by Grant at 9:48 AM