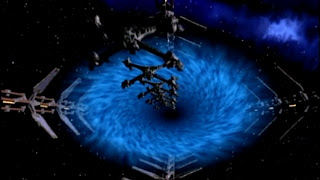 Earth's President Luis Santiago is about to make a major policy address on Babylon 5. His security team arrives on the station to make preparations as a sudden explosion rocks one of the station's fighter bays. Garibaldi finds himself falsely accused of sabotage, and goes on the run from Presidential security - and his own past.

"Survivors" is a nice episode: it advances the overall narrative of the series, it showcases Michael Garibaldi and fills in quite a bit of his backstory. He's revealed as a recovering alcoholic for one thing. It's not the greatest portrayal of alcoholism committed to screen (that would be John Spencer's Leo McGarry in The West Wing), but it's not embarrassingly bad either. Part of what lets Garibaldi's arc down a little is Jerry Doyle's performance. He brings a lot of charisma to the role, but not a huge amount of talent. As far as I'm aware he doesn't act at all these days, and instead works as a talk radio host.


I was originally going to type "right-wing talk radio host", and then worried if I typed that it would seem like some kind of judgement. I'm a relatively left-wing guy myself, and if I identify Doyle as right-wing does that form some kind of judgement against him on my part? It doesn't, or at least I don't think it does. One thing I do appreciate from Doyle's post-acting role as political commentator is his coining of the phrase "grapefruit mentality": the idea that if the news media ran a story every night about a grapefruit, Americans would flock to see the grapefruit themselves and generally obsess over it. It's this mentality that explains why everybody seems to keenly follow news of crazy old people in Wisconsin finding the image of Jesus in their breakfast cereal, or think they need to know or have an opinion on celebrity divorces.

I've digressed. Where was I? 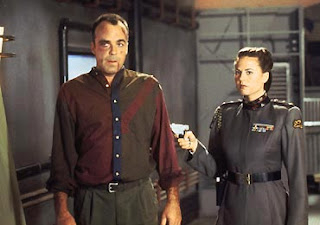 Elaine Thomas guest stars as Lianna Kemmer, a former acquaintance of Garibaldi's who still blames him for the death of her father. She's the weakest link in the episode, giving a very unconvincing, relatively flat performance. She's also the centre of a very big jump in logic: would someone competent enough to be head of security for a President be so bitter about the man she holds responsible for her father's death to leap to the conclusion that he's trying to murder her boss? It feels silly, and rather trite.

Thankfully once Garibaldi is on the run he gets to have two conversations in turn with Ambassadors Londo and G'Kar, the two shining lights of Babylon 5. Both scenes are insightful and well-scripted. I particularly liked one line of G'Kar's: "The universe runs on the complex interweaving of three elements: energy, matter, and enlightened self-interest." I don't think J. Michael Straczynski is an exceptional great writer, but he does knock a ball out of the park now and then, dialogue-wise. (This episode is credited to series story editor Marc Scott Zicree, but Straczynski has claimed online that this line was his.)

There's lots of nice detail: a low gravity environment on the station where everyone has to hold onto hand rails to avoid bouncing away, the body of a maintenance worker flailing away into deep space when caught in an explosion, that hilarious prayis mantis puppet who keeps cropping up from episode to episode, and so on. It's the small stuff that I think helped endear Babylon 5 to so many science fiction fans - they appreciate these kinds of embellishments.

The problem I've had when scoring a lot of Babylon 5 episodes is that so many of them fall right in the middle: not so bad that I'd actively recommend viewers avoid them, but in turn not good enough for me to feel wholly comfortable talking them up either. This is another one of the fence-sitters, but in this case I think the good outweighs the bad just enough for me to give it the thumbs up. So that makes four good episodes out of eleven. We're halfway through Babylon 5 Season 1, and it's scoring 36%.
Posted by Grant at 9:27 AM