Judging the New 52 #3: Legion of Super-Heroes 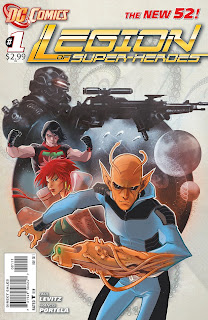 If you want to experience the frighteningly obsessive end of comics fandom, start reading Legion of Super-Heroes. I have never encountered a comic book with such a dedicated, aggressively enthused set of readers. I think you have to be obsessive to be a regular Legion reader. The title has as two of its core features an extended cast of similarly-named superheroes and a mixture of space opera super-heroics and soap opera. I've been curious about the Legion for years, but it was only with the New 52 relaunch that I took the plunge and started reading it each month.

It's very good, but it's also almost impenetrable. I've read 10 issues and I can recognise three of the regular cast: Brainiac 5, Chameleon Boy and Mon-El. Others I may recognise them on the page, or know the name, but I'm unlikely to know both at the same time. It's also a very serialised title, which is an oddity in an industry geared towards broadly self-contained multi-part stories (what we call "writing for the trade"). I think it's a very enjoyable comic book, and if you've ever had an interest in the Legion you should check it out, but it's a comic you need to be reading for the long haul to give yourself time to get immersed in its characters and storylines. The first trade paperback is out rather cheaply ($19.95 in Australia), and is the best way to start.

So how does such a 'hard-core' comic fare in terms of sales? Pretty much as you might expect. 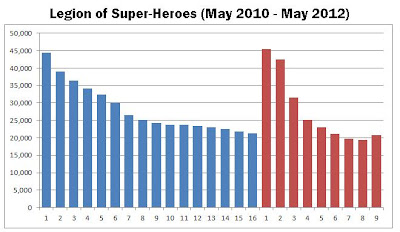 Legion of Super-Heroes is interesting among the New 52 titles, because the New 52 came less than 18 months after an earlier relaunch of the title. As such we're not looking at the 24 months leading up to September 2011, but rather the preceding 16 months.

They're clearly very similar, although the one thing I will note is that it took eight issues for the New 52 edition to bottom out, and 16 issues for the Pre-52 edition to do the same. I suspect the bottom line is that there are about 20,000 hard-core Legion fans who are going to purchase this book rain or shine, and another 25,000 comic book readers who are intrigued by the title but simply can't engage with it before losing interest.

I think there's huge sales potential in Legion of Super-Heroes. It has a strong history and legacy, a rich and varied set of characters (except in their names - all Something Lad or Whatever Girl), and a combination of far future space opera and superheroics. It needs a much tighter introduction than the most recent reboot, however, and a real push from DC's marketing people to get people reading it again.
Posted by Grant at 10:50 AM