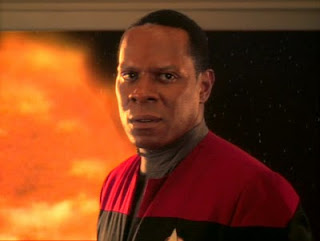 On the fourth anniversary of his wife's death, Commander Sisko unexpectedly meets an enchanting and beautiful woman. Meanwhile, a famous scientist comes to the station in preparation to re-ignite a nearby dying star.

The awesome run of Deep Space Nine episodes had to end sooner or later, and it ends with a clunk. I'm straining to think of a decent romantic episode produced in any of the Star Treks, and I can only come up with "Lessons", the Next Generation episode where Picard bonds with a visiting astronomer over a mutual love of music. "Second Sight" doesn't join it. It's an all-round weak episode, eminently missable and regularly just that little bit irritating.

One of the biggest drawbacks of this episode is the B-plot, in which Federation scientest and terraforming legend Dr Seyetik (Richard Kiley) prepares to kickstart a dead star. The character is broadly drawn as a loud, brash, egotist, and Kiley plays the role in a very theatrical fashion. The result is a character that makes me cringe every time he's on screen. 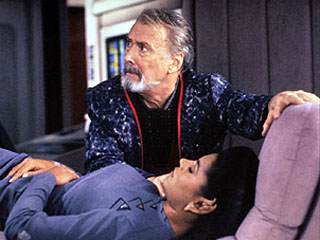 Salli Elise Richardson plays the dual role of Seyetik's formal, withdrawn wife Nidell and the mysterious romantic stranger Fenna who shares a romance with Sisko. There's an attempt to create a mystery over why Fenna looks identical to Nidell, or whether the one woman is romancing two men at the same time. The resolution is fairly silly, but to be honest by the time it comes it's difficult to care all that much. About halfway through the episode Major Kira begs Sisko's permission to leave Dr Seyetik's reception: I knew exactly how she felt.

Nine episodes into Season 2, and there have been seven good episodes so far, or 78%. (Ha! Seven of Nine! Wait, wrong series.)
Posted by Grant at 4:39 PM