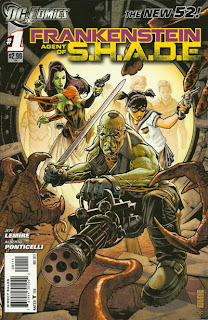 Not every New 52 title is a reboot or relaunch of a recent title. One of the more intriguing titles of the New 52 has been Frankenstein: Agent of S.H.A.D.E., a re-imagining of a very old DC character (itself a reimagining of Mary Shelley's fictional monster) transformed into DC's unofficial riff on Hellboy. Is that uncharitable? I have no idea. It feels like a Hellboy clone to me - just a very, very good one. I suppose there's also an argument that much of Mike Mignola's BRPD stuff owes a debt to DC's Doom Patrol, so maybe this is just one of those cases of creativity and homage coming full circle.

Despite feeling a little derivative in its overall concept, Frankenstein is a really fun book. It's smart, weird, funny yet remains strongly in the superhero team genre. The scripts are by Jeff Lemeire, acclaimed writer/artist of Sweet Tooth and a bunch of other titles, and he's made it a really enjoyable ride - although as of #10 he's off the title, with Matt Kindt taking over.

New titles are always the hardest to find audiences for, and I'm not sure there was a huge in-built audience clamouring for DC to revisit Frank and give him his own ongoing title. So how are the sales going? 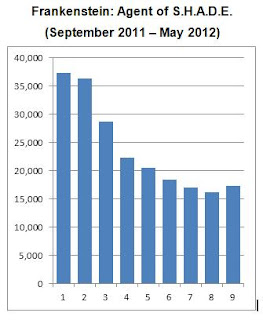 I'm going to blunt and say 'not well'. Certainly sales started off strong: 37,396 copies of the first issue is an impressive feat given the intense competition (51 other first issues debuting that month, for one thing) and the untried concept and characters. The book only lost about 1,000 readers for its second issue as well, which is an attrition rate of only 3%. Since then, things have visibly taken a bit of a slide. 28,681 copies sold in issue #3 (down 21%), then 22,331 in issue #4 (down 22%), and so on. The series has bottomed out at 16,158 copies for issue #8. DC's Resurrection Man only sold about 1,000 copies less that month and it's since been cancelled. There's been a minor bump to 17,266 copies for issue #9 (up 7%), but that's due to a one-issue crossover with Animal Man. I'll be surprised, when the June 2012 sales figures are released, if issue #10 doesn't slip back under 16,500 - over even lower.

A more extensive three-way crossover with Animal Man and Swamp Thing is on its way, and this may go some way to bumping up the sales figures, but as it stands I can't see Frankenstein: Agent of S.H.A.D.E. lasting beyond December. That would be a shame - I rather like this comic.
Posted by Grant at 10:51 AM