Judging the New 52 #6: Fury of Firestorm: The Nuclear Men 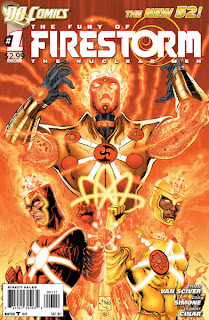 Firestorm is just one of those characters that DC won't allow to die. I'm not sure he's anybody's favourite character. I don't think I've met any keen Firestorm fans. He's never had a cartoon of his own, he's not really known outside of the DC fan community, and no matter how many times DC release a solo Firestorm comic it seems guaranteed to bottom out and get cancelled. Yet, like clockwork, DC simply waits a few years and relaunches the title again.

The first volume of Firestorm was published in 1978 was cancelled after five issues. The second volume, published from 1983, actually managed to scratch out a 102 issue run until it was cancelled in 1988. This is actually the volume I've read quite a bit of, and it's quite good. In 2005 the third volume was published, lasting 36 issues before once again being cancelled for low sales. Finally, in the New 52 we receive the fourth volume of the title, now called Fury of Firestorm: The Nuclear Men. 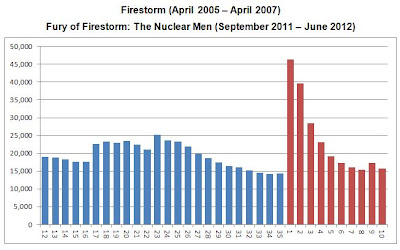 This fourth volume has been quite messy, marred by creative changes and a distinctly uneven tone and quality. Personally I found it fairly unreadable and quit after three issues. Anyone who's read further is encouraged to give her or his opinion in the comments below.

If you look at the sales - this compares the last two years of the third volume (simply titled Firestorm) with the first 10 issues of Fury of Firestorm - you can see that Firestorm is simply not a character with a dedicated core audience. You basically need a solid readership of about 20,000 to be sustainable at DC, and no matter who's writing, Firestorm seems incapable of staying at that level. It's about 5,000 readers short every time. You can even see above that people really did give Fury of Firestorm a decent chance with more than 45,000 people buying that first issue. Two thirds of those new readers have already left.

If I was King of DC Comics (and I should be, naturally), I'd find a solid team book into which I'd place Firestorm and hopefully attract some of those 15,000 fans with his presence. Despite my disbelief, it seems that some people like the character - if we put all the DC heroes like him into a single book, DC might just manage a sale.
Posted by Grant at 5:28 PM