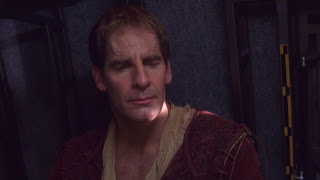 "Civilization" is a refreshing and well-produced episode. One of the key tenets of the Star Trek universe has always been the Prime Directive, which essentially bars high technology space-faring civilizations from contacting or interfering with civilizations with lower levels of cultural sophistication and technology. Enterprise is set before this important (occassionaly tedious) rule was established, which means Archer and the gang get to find a pre-industrial world, put on some rudimentary disguises, and head down for a quick look around. What they find is that they aren't the first space-faring civilization to visit the planet, and the rest of the episode goes to show - in a typically action-adventure fashion - why the Prime Directive is probably a very good idea. 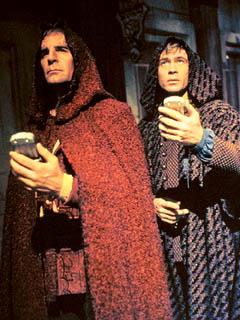 Asides from the central plot about tracking down hidden aliens and discovering what they're actually doing on the planet, Archer gets to share a brief romance with Riann (Diane DiLascio), a local apocathery who's worked out by herself that something unusual is going on. It's a very well played romance - I was complaining in my review of Deep Space Nine's "Second Sight" that Star Trek sucks at romance episodes, but I think they're often quite good at incorporating romantic elements into an otherwise dramatic story. It certainly works here - particularly a scene where Archer's universal translator (still brand-new in the Trek universe) stops working.

There's nothing exceptionally ambitious about "Civilization", but what it does is none well and with quite a lot of small inventive flourishes that bring it to life. There's even would be argued as a small tribute to 1980s TV series V - at least, when a human's face gets ripped off to reveal a green reptile inside, that's all I can think of.

Another good episode, then: that makes five out of eight, or 63%. I'm genuinely surprised at how enjoyable I'm finding this series.
Posted by Grant at 1:58 PM