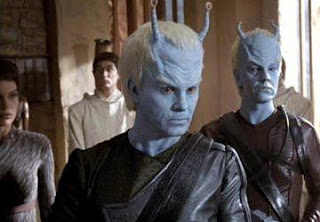 The Andorians are a blue-skinned humanoid species, with a thatch of white hair and two vaguely prehensile antennae. They are, in my opinion somewhat bizarrely, one of the most famous of the original Star Trek aliens. This is in despite of appearing properly once, in the fan favourite episode "Journey to Babel", and then making occasional cameos (and I really mean cameos) in a couple of episodes of Star Trek and Star Trek: The Next Generation, and filling out a few crowd scenes in the Star Trek films. I suppose they do also make two noted appearances in Star Trek: The Animated Series, but does anybody actually watch that show?

"The Andorian Incident" is, then, quite a fascinating episode to watch. The Enterprise visits an isolated Vulcan monastery, only to find it has been hijacked by four angry Andorian commandos who insist the monastery is a front for a secret Vulcan surveillance operation. In essence, it's a hostage drama coated liberally in Star Trek fan service. Andorians versus Vulcans? All they needed was a ship full of Klingons to turn up and half of fandom's heads might have exploded.

It's not a surprise that this episode was one of the few to get any kind of general acclaim when Enterprise first aired. It's tightly plotted, engaging and doesn't ultimately go in the direction you might suspect it does. For one thing it doesn't portray the Vulcans in a particularly positive light. It's an odd part of Enterprise and I'm still struggling a little to get to grips with it: the Vulcans of Star Trek as a whole are the Vulcans of Spock. They're logical, calm, peaceful and supportive. The Vulcans of Enterprise are controlling, deceitful and manipulative. They seem slightly paranoid of human beings. They're not particularly likeable.

One of the nicer bits of development already shaping up in the series is the transition of T'Pol from controlling, deceitful Vulcan to a productive and supportive member of the Enterprise crew. I mentioned in an earlier review the attempt to recreate the Kirk-Spock-Bones triumvirate with Archer, T'Pol and Trip, and that effort is actually beginning to pay off in this episode. It's at the expense of the rest of the cast, with only Dr Phlox standing out as even remotely interesting. Reed, Hoshi and the young helmsman whose name I can never remember and who seems like a ring-in from Galaxy Quest simply fail to engage (there's a little Trek-inspired pun for you). 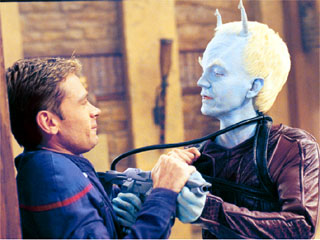 Commander Shran, the aggressive leader of the Andorian commandos, is played by cult film legend Jeffrey Combs. Including this character he's played seven different guest roles in Deep Space Nine, Voyager and Enterprise, and seems kind of a fixture of post-Next Generation Star Trek. It's a very different part for him here - I'm most accustomed to seeing him as Weyoun, a series of obsequious clones in Deep Space Nine. Beyond Star Trek he's got more cult film cred that pretty much anyone in Hollywood: Re-Animator, Robot Jox, The Guyver, Fortress, Necronomicon, The Frighteners, I Still Know What You Did Last Summer, House on Haunted Hill, and others. He was Captain Cold in The Flash, the Question in Justice League Unlimited, Dr Burkoff in The 4400, and guest starred in Beauty and the Beast, Freddy's Nightmares, Babylon 5, Freakylinks, The Twilight Zone, Masters of Horror, Transformers Prime and The Avengers: Earth's Mightiest Heroes. Combs is, quite simply, the poster child for "ooh, who's that guy? I've seen him in everything".

The episode is directed by Roxann Dawson, former cast member of Star Trek: Voyager. I didn't mention in my last review of "Terra Nova" that that episode was directed by former Next Generation star LeVar Burton. A quick look over Enterprise's first season reveals six episodes directed by former Trek actors, including return shots for Dawson and Burton as well as single efforts by Robert Duncan McNeill (Voyager) and Michael Dorn (Next Generation/Deep Space Nine). I'm not aware of another television series or franchise with such a strong reputation for training its cast to direct.

The teleplay is by Fred Dekker, whom cult film fans will best know as writer/director on Night of the Creeps, The Monster Squad and Robocop 3 (with Frank Miller). The storyline was co-developed with executive producers Rick Berman and Brannon Braga, marking their sixth episode in a row as story writers. I don't remember another iteration of Trek where the showrunners have been so hands-on with the scripts. I'm not sure if this is a good or a bad thing, given the shaky and uneven quality of the episodes so far. They become a lot less hands-on from here on in, so I guess we'll find out.

"The Andorian Incident" is easily what we might call "one of the good ones". It's tight, entertaining and a bit of a crowd-pleaser. That leaves Enterprise at six episodes in, and scoring exactly 50%.
Posted by Grant at 10:05 AM