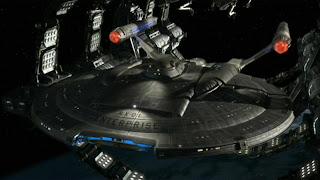 When it premiered in 2001 I really hated Enterprise. The characters irritated me, the scripts were annoying and more than anything else it was a prequel - the most unnecessary thing in the history of storytelling. I struggled through the pilot, watched a handful of episodes and then abandoned it. I watched all of Star Trek and The Next Generation. I adored (and continue to adore) Deep Space Nine and enjoyed a lot of Voyager. I've even been known to watch the animated series. But Enterprise? One bridge too far. Just too badly made. Too irritating to bother with. It may be the show that killed Star Trek on television after almost 20 years of continuing broadcasts, but for me it was dead on arrival.

I wouldn't be able to tell you why I tried it again this month. I think mainly it was the fact that the first season was on sale, coupled with the simple fact that I'm a Star Trek tragic since childhood. It's Star Trek I haven't seen, even if it was completely awful. I just had this overriding compulsion to try Enterprise one more time.

I'm not going to lie to you: I am genuinely surprised to discover that a decade later, I am really enjoying the hell out of Enterprise. It's not the greatest show in the world, and half of its characters really aren't that interesting, but when this show shines it really appeals to me. A decade on it seems a victim of its own franchise: the fourth sequel series in a row, produced by-and-large by the same group of writers and producers, similar enough to feel jaded and reheated but different enough in all the wrong places to irritate. The last 10 years, however, have let me separate the series from the rest of the franchise. I'm watching Enterprise on its own merits, and I'm liking what I find.

"Broken Bow" is the 90 minute premiere episode of the series, and sees a mysterious alien get shot down in rural America. During this time period (the 22nd century), Earth has made initial contact with a handful of alien species, and has spent close to a century shackled to their own planet while the supervising Vulcans wait to see when humans will be properly capable of venturing into the galaxy. When the Earth's fledgling space force, named Starfleet, elects to return this alien to its home planet, they finally break free of Vulcan supervision and begin to explore the galaxy on their own.

Part of the intended appeal of Enterprise is seeing all the familiar icons of the Star Trek universe get introduced one by one. The problem is that they introduce these items far too quickly. The mysterious alien being returned home is a Klingon, and the episode also sees the first human transport and the introduction of phaser pistols. It all seems a bit too forced and fast. Strangely it's the other elements that appeal more: this is a far less experienced crew than we've seen in Trek. Everything seems a little uncertain, a little haphazard and cavalier. There really is a sense of wonder among many of the characters.

One big problem the series has is its regular cast is split between four really engaging characters and four really dull characters. Thankfully this premiere episode mostly focuses on the four good ones: Captain Jonathan Archer (Scott Bakula), science officer T'Pol (Jolene Blalock), engineer Charles "Trip" Tucket (Connor Trinnear) and the alien Dr Phlox (John Billingsley). (I do want to note, however, that two female characters in a cast of eight is really not good enough: not now, not in 2001 when this pilot first aired.) 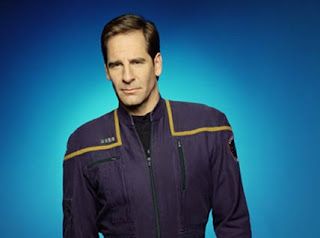 I didn't buy Bakula as a driven starship captain the first time around, because I identified him too strongly as the time traveller Sam Beckett from Quantum Leap. It's now been longer since I saw an episode of Quantum Leap than an episode of Enterprise, and I now find that comparison isn't there. I also found Bakula extremely engaging in William Shatner's recent documentary The Captains, and I think that's helped me like Archer a lot more.

Jolene Blalock seems to have a similar problem to the one Jeri Ryan had in Voyager: an excellent actress giving a strong, measured performance in a role that - visually at least - seems to have been designed as sex appeal for the male gaze. Playing a Vulcan is hard. Leonard Nimoy perfected it with Spock. Tim Russ mostly failed to convince me as Tuvok in Voyager. Personally I think Blalock nails it.

Connor Trinnear gets to play his role very much in the manner of DeForest Kelley's Dr McCoy, full of charm and manners. He's walking a tightrope between believability and mild caricature, and for the most part - so far - seems to be succeeding. Finally John Billingsley is the latest in a series of great character actors covered in latex make-up. He manages to be enthused about  and unfamiliar with humans, but in a professional and genial fashion, and not in the irritating way that Voyager's Neelix (Ethan Phillips) was regularly saddled with.

So, from its first episode alone, I'm finding Enterprise to be an interesting viewing experience. It's oddly unsuccessful at being Star Trek, yet is somehow managing to charm me ten years too late. I'm wondering - is this a series we misjudged all along, or is it simply becoming better with time?
Posted by Grant at 10:50 PM