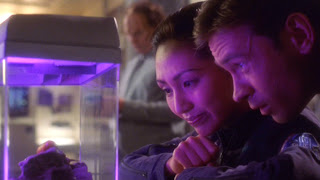 There's something nice about the first few scenes of Enterprise's second episode. A few weeks after their maiden voyage to the Klingon homeworld I will not attempt to spell, we find them bored half to death as the Enterprise fails to explore any strange new worlds or seek out new civilizations. The most interesting thing they've found is an alien slug. I like the contrast.

Obviously things don't stay quiet for long, and they soon find themselves exploring a drifting alien spacecraft where the crew have been killed and set up into a macabre medical rig designed to draw out various fluids. It's all quite horrible really, and the question rises of whether the Enterprise should leave the ship well alone or make some attempt to contact the civilization that sent it. All of this is basically a background with which to explore Enterprise linguist Hoshi Sato (Linda Park), who is coming to the realisation that space is not a place she wants to be.

I don't like Hoshi. It's not Linda Park's fault - she does very well with what she's been given. As written, however, she's weak and panicky. She is created in such a fashion that I find it difficult to believe that she would have agreed to join the crew at all, or even that Captain Archer would have been foolish enough to select her. As a result it's difficult to appreciate this episode as much more than 42 minutes of Hoshi whining and complaining. 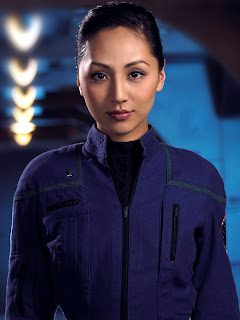 She really is a pointless character: the idea of a linguist being required to translate and interpret with alien contacts is a good one, but it was negated pretty much as soon as the series started with early universal translators making an appearance. So instead of being the vital link in communications, Hoshi is the person who does a little bit of jiggery-pokery before the aliens all speak English. It's a missed opportunity, and it's a deep shame that the series wastes one of its two female actors on what is striking me as a dead-end character.

It's also becoming difficult to reconcile this series' representation of the Vulcans with what we've seen elsewhere in Trek. Here T'Pol urges Archer to leave the ship well alone, and once they've discovered its dead crew she continues to press for the ship to leave and not look back. This chafes badly against the more benevolent, thoughtful representation of the Vulcans that I'm used to, and seems more than a little unsympathetic. Once again it feels like the worst aspect of Enterprise is its links to Star Trek as a whole. This week's "first use of" goes to the humble photon torpedo, which Lt Reed spends most of the episode working out how to aim at things.

I may as well score this series in the same way in which I have been scoring Babylon 5 and Deep Space Nine, in which case I think Enterprise is scoring one out of two, or 50%: "Broken Bow" was okay, but this one simply isn't worth it.

While we're both here though, am I the only person to find it hilarious that, thanks to the time-travelling shenanigans of 2009's motion picture Star Trek, the only part of the whole franchise that is still unchanged in continuity is Enterprise? Star Trek, The Next Generation, Deep Space Nine and Voyager are all out of the picture now, but Enterprise still happened. You have no idea how much this makes me laugh.
Posted by Grant at 9:44 PM