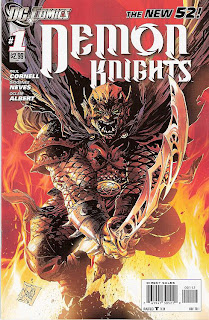 One of the things I did really appreciate about the New 52 was DC's concerted effort to expand the scope of its titles. Demon Knights is a solid case in point: it's set in the DC Universe, features well-known immortals such as Etrigan the Demon and Vandal Savage, but is set in the Dark Ages. This effectively allows writer Paul Cornell to have his cake and eat it too. It fits snugly into a superhero universe, but is for all intents and purposes a pulp fantasy. Diogenes Neves' artwork is great too. This isn't my favourite New 52 book (that would be Scott Snyder's Batman) but it is one of the more enjoyable ones.

I like team books, and I like fantasy as well, so combining the two is an easy way to get me to like a comic. Demon Knights has been scratching an itch I've felt ever since DC cancelled Bill Willingham's excellent Shadowpact series. I'm also a fan of Etrigan. Cornell has by-and-large dropped Etrigan's rhyming dialogue, which certainly makes him easier for Cornell to write, but I appreciate he's done so by tweaking the character a little. The rhyming is still there from time to time, but only when the character's talking in a formal context (such as meeting with superior demons in hell).

In short: this is one of the 'good ones'. The first trade paperback is out, so if you like the idea of a Dark Ages superhero fantasy comic and haven't tried it yet, go to your nearest comic shop and check it out. 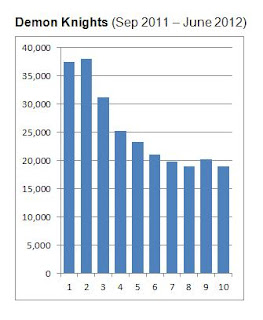 In terms of sales, Demon Knights is performing pretty much how you might expect. Like all New 52 books it started strong, and then rapidly shed readers until hitting a bottom at around the 19,000 readers mark. That's not quite sustainable, but I think it's probably strong enough to guarantee the book a second year. After that it will be up to DC to provide a boost: a time-travelling crossover with a better-selling book would probably do the trick.

One test for the title is coming in September when DC release a second fantasy book, Sword of Sorcery. Is DC's market big enough to support two fantasy titles? My guess would be yes, but time will tell. I may have to revisit the statistics at the end of the year.
Posted by Grant at 9:41 AM