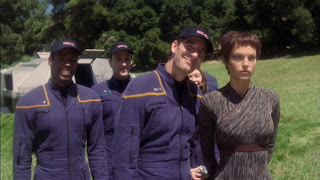 Did it really take five iterations of Star Trek to reach an episode titled "Strange New World"? It seems such an obvious title for the franchise to use. In this third episode of Enterprise the crew discover an all-new M-class planet and, slowly going stir-crazy with their ongoing lack of action, they decide to take a shuttle down and explore it for themselves. Archer gets to walk his dog, while a small team stays overnight to make a further study of the planet's extensive flora and fauna. Things happen. They are not alone. A storm brews. Tensions rise. Shenanigans occur.

It's becoming pretty clear why Enterprise is frustrating to the average Star Trek fan, and why I'm finding it so refreshing to watch 10 years later. It's difficult to image Jean-Luc Picard devoting his first-ever away mission to walking his dog - it's such a banal, everyday activity that against a background of interstellar exploration it seems completely ridiculous. That's the core appeal of this series to me: Enterprise doesn't feel like an effective prequel to Star Trek in most areas, but it certainly does in how a starship crew behaves. Even compared to the 'seat of your pants' commanding style of James T. Kirk, Archer and his buddies come across like amateur hour. It's an odd depiction of space exploration in which, by and large, the explorers don't have a clue what they're doing. 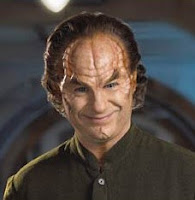 The core storyline, in which the away team find themselves stalked by a strange species of shapeshifting rock people, starts off derivative and boring and finishes up quite exciting and original. There's a wonderful 'old-school' vibe to this episode. It feels like it has been adapted from an old science fiction short story in one of those cheap newsprint magazines - Asimov's, Analog and so forth. There's also a lovely scene for Dr Phlox, rapidly becoming one of the series' best assets, as he explains to the Captain that he sorely misjudged a critical medical situation.

Is this episode perfect? Absolutely not. It is better than your average SF TV episode, however, and breezes along quite entertainingly. So I'm giving it the tick of approval, and that makes two out of three so far, or 66%.

One thing I haven't actually mentioned in these reviews yet is the main titles. Visually I think they're great: they recount a history of human exploration from sailing the oceans to landing on the moon, exploring Mars (including, for the record, the first-ever shot in a science fiction TV series that was actually shot on another planet - they use NASA footage) and eventually interstellar travel. This beautiful montage, however, is accompanied by a slightly re-jigged version of "Faith of the Heart", a Diane Warren song originally composed for the Robin Williams vehicle Patch Adams. It's a slow, heartfelt, ultra-commercial ballad, in this version sung by Russell Watson. It's a really poor fit, and more than any other element marked the series out as a target for ridicule and scorn. Personally I have a conspiracy theory that the only reason the song was used was because someone high-up in the production team was a massive Star Cops fan, and didn't want that series to have the worst opening titles music in television history any more.
Posted by Grant at 9:44 AM