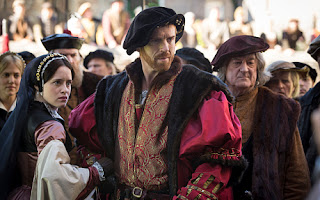 It is 4 February 2015, and time for the third episode of Wolf Hall.

Thomas Cromwell (Mark Rylance) continues to expand his power and influence at court. King Henry (Damian Lewis) battles to convince the Parliament to make him - and not the Pope - the head of the church in England, all in aid of his quest to replace Queen Katherine with the ambitious Anne Boleyn (Claire Foy).

There is a marvellous sense of rising dread in Wolf Hall. Both Thomas and Anne are boldly ambitious people, using every opportunity available to them to rise in status and power. They are, not surprisingly, making a lot of enemies on their way. The question is - and anyone with a knowledge of English history will already know the answer - how far can each of them go before they are in over their heads and in serious trouble?

The elements that made the first two episodes of Wolf Hall so successful are well in evidence here. Both the lighting and the subject matter remain dark and troublesome. Characters circle one another in games of politics that can - and, in this episode, do - end with a body count. This is an episode of threats, and counter-threats. When the despondent aristocrat Henry Percy (Harry Lloyd) starts to make trouble for Anne, it is Thomas Cromwell who is sent to shut him down. He does so with a beautifully scripted scene about where the real power lies in Europe: not with kings and monarchs barking commands, but with the traders whose wealth is slowly transforming the continent. Mark Rylance continues to play the role of Cromwell with such a masterful and delicate touch. He is growing ever more powerful, yet he keeps and maintains that power with the gentlest of deliveries and the most careful of words. It's a performance that lives in pauses and lingering glances.

Claire Foy's performance as Anne Boleyn is tremendous. She is ridiculously ambitious and over-confident, mocked behind her back by her ladies-in-waiting - not to mention her own sister (an excellent Charity Wakefield) - and completely misunderstands the will and sentiment of the English people. Yet there is a strength to her and an odd sort of sympathetic appeal - a lot of that comes from Foy's charismatic performance. It has been fascinating to watch her relationship with Cromwell shift over these episodes, to the extent that for now they seem active allies.

Hanging ominously in the background of the episode is Thomas More (Anton Lesser), who resigns as Henry's chancellor in protest of his break with Rome. While the series overwhelmingly presents the narrative from Cromwell's point of view this episode opens in striking fashion with More reading a Latin scripture to a sobbing man being broken on the rack. It is a highly provocative portrayal of a significant figure in British religious history, and one that offended more than one Catholic viewer when the series was broadcast last year. The man being tortured is the lawyer James Bainham, who has taken to reading the Bible in an English translation and who denies all of the additions to Christian theology that do not stem from the Scriptures. While this series focuses in large part on Henry's break from Catholicism to marry Anne, it does so in the context of a broader fracturing of the Catholic Church across Europe. The ever-pragmatic Cromwell gives us a modern viewpoint on the fracture, and for better or worse More remains as a figurehead for a controlling, corrupt medieval Church. If anything Lesser's performance makes the situation even more hostile, with his constantly smiling, insidious portrayal.

Historically accurate? Not entirely, but it makes for pretty sensational television.
Posted by Grant at 4:45 PM