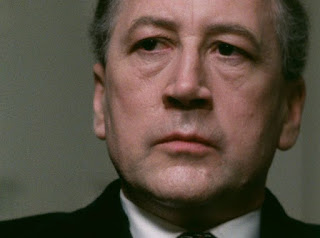 It is 15 October 1979 and time for the sixth episode of Tinker Tailor Soldier Spy.

Smiley (Alec Guinness) has one more person with whom to speak before he is reading to move in on the MI6 mole: journalist Jerry Westerby (Joss Ackland), a one-time ally of the Circus now also out of service.

The end of episode 5 seemed to indicate that Tinker Tailor was swinging around for its final act, and this episode is pretty much an uninterrupted downhill run towards the climax. Smiley's list of suspects has narrowed to three, and he is finally prepared to step forward and lay a trap for the mysterious "Gerald" whose leaked intelligence has cost so many lives. It is enormously satisfying to see it all finally slot together.

It is a little surprising to see an actor of Joss Ackland's stature pop up for a single scene. From reading up on the episode after the fact it appears he accepted the role because Westerby was to be the protagonist of the sequel series, The Honourable Schoolboy. Sadly when the time came to produce the Hong Kong-set follow-up, BBC management blanched at idea of an overseas shoot and leapfrogged Schoolboy straight to the much cheaper Smiley's People. Still, even for the one scene he's a wonderfully entertaining character. I have always been a fan of Ackland, but my experience of him is mostly confined to Hollywood films from the late 1980s including The Hunt for Red October and Lethal Weapon 2. It is a real shame we never got to see his Westerby in his own series: Ackland would have been marvellous.

With all the information to hand, and a clear idea on what has been going on, Smiley is finally ready to spring a trap and uncover the mole. He begins with poor Toby Esterhase (Bernard Hepton), luring him to a safehouse via Guillam (Michael Jayston) on the promise of a new intelligence contact. Once there Esterhase is confronted with the evidence regarding a mole in MI6 and is forced by Smiley to cooperate.

It's a wonderful scene to behold. Esterhase folds so quickly, more desperate to save his own career than bother to challenge Smiley on any of the facts. Bernard Hepton plays the character so beautifully, giving him an ugly degree of vanity but a remarkably weak resolve. Alec Guinness is also superb, showing off a rarely-displayed hardness to Smiley that lies just visible underneath a veneer of gentleness and politeness.

By episode's end everything has been set up for the finale. Esterhase has revealed the location of the townhouse where the leaders of the Circus meet with their Russian informant, to whom the mole has been passing valuable intelligence back to the Soviets. Ricki Tarr (Hywel Bennett) has been sent to Paris to send an urgent message to the Circus begging for an immediate meeting. All they need to do now is wait in hiding at the townhouse and see who turns up.
Posted by Grant at 7:26 PM