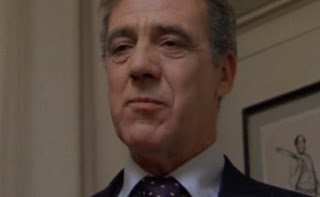 It is 24 September 1979 and time for the third episode of Tinker Tailor Soldier Spy.

Smiley (Alec Guinness) begins his hunt for the mole in the Circus by visiting an old friend at Oxford. Meanwhile his assistant Quillam (Michael Jayston) ventures into the Circus himself to obtain valuable intelligence on Smiley's behalf.

This third episode of Tinker Tailor Soldier Spy effectively divides itself into three sections. The first two are mentioned above. The third is another lengthy flashback, this time to Smiley's closing days as deputy chief of the Circus before he is forced out by the ambitious Percy Alleline (Michael Aldridge). It is a valuable addition.

The flashback is the final piece of information the audience really needs to move forward and properly understand what is going on. It lays out the internal power-plays going on inside MI6 (the so-called "Circus") and gives the viewer their best opportunity so far to see the four suspected moles in action and begin judging for themselves as to which one is rotten. Michael Aldridge is marvellous as the ambitious, snide Alleline. He positively oozes untrustworthiness, but he is presented in a wonderfully ambiguous fashion. Is he simply an aggressive and competitive ladder-climber, or is he the Soviet mole that Smiley is hunting? At this stage it is impossible to tell. It could easily be any of his three similarly dodgy off-siders, whether it's the pasty-faced and rather creepy Toby (Bernard Hepton), the chain-smoking Roy (Terence Rigby), or the pretentious Bill (Ian Richardson). To be honest all four of them seem likely candidates: they are all in their own ways remarkably unpleasant people, and it would be a pleasure to see any of them taken down and arrested.

Beryl Reid makes an enormous impression as former research head Connie Sachs, who is now - like Smiley - forced out of the Circus and into early retirement. Smiley visits her for confirmation of elements in Ricki Tarr's story. She makes for a visibly intelligent woman who has slipped into old age and alcoholism. Reid balances the elements of her characters incredibly well, making her both likeable yet simultaneously rather depressing and pathetic.

While Smiley is in Oxford, Quillam is attempting to get to secret files in the Circus. It's a wonderfully tense sequence of events, made more so by the dull realism of the series in general. This really is the opposite end of spy fiction to James Bond: the security in the Circus might not be up to what 007 would be used to, but at the same time Quillam doesn't have the gadgets and over-the-top shenanigans to get away with it.

One of the stranger aspects of this series, and one that has become evident by the end of this third part, is that it lacks a properly episodic structure. There is no real sense of closure at the end of each episode, but neither is there any kind of particularly tense cliffhanger either. Things simply happen for the requisite 45 minutes and then the credits roll. The following week things simply pick up happening again. It is not something that is particularly annoying when watching one episode after another in a single binge-viewing, but it surely must have seemed odd back when it was broadcast one week at a time.

The series is still slow, but the pace allows it to showcase a broad range of characters and give the audience plenty of time to keep the various flashbacks and story developments clear in their heads. It is, ultimately, a series about character rather than plot. The characters themselves are well worth it.
Posted by Grant at 7:46 AM