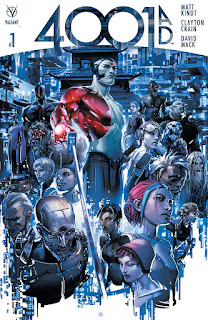 One of the best titles Valiant has published in recent years has been Rai. Matt Kindt and Clayton Crain have done an outstanding job showcasing the far-future technological dystopia of New Japan. This week they take the opportunity to expand beyond New Japan and showcase the entire planet Earth of the 41st century in 4001 AD, an all-new four-issue miniseries.

It is a phenomenal opening chapter, with an epic scale and a strong introduction to orient and inform new readers. The real star, however, is the painting artwork. It is as if the book is composed of science fiction paperback covers, each evocative and thrilling, with vivid colour and an outstanding sense of size and movement.

Thankfully Kindt's script is up to the challenge of matching the artwork, and 4001 AD successfully works as both a science fiction story and as a look into the far future of the Valiant superhero universe. Everyone is entertained: this is a great book. (5/5)

Under the cut: reviews of Amazing Forest, Dungeons & Dragons: Shadow of the Vampire, and 3 Devils.

Ulises Farinas and Erick Freitas' anthology comic continues with four more short comic book stories, each with a different artist. First up is "Villain's Friend", with art by Jack Forbes. It's an amusing if predictable story of a supervillain trying to work out what do once he has taken over the world. Taylor Smirl illustrates "The Wish Goblin", which suffers a little from weak art but which packs a powerfully bleak punch. "Snow Jokes", with art by Alison Wight, and "Robo Dream", with art by Edwin Vasquez, simply don't work very well at all with neither story nor art impressing enough to be worth reading. Anthology comics are always a bit of a mixed bag of good and bad elements, but this particular bag has a little too much bad and not enough good. (2/5)

Dungeons & Dragons: Shadow of the Vampire #1

A group of adventurers are hired to defend a temple from monsters. There's always something a bit generic about these kinds of pulp adventure comics, particularly those based on role-playing games. As a result much of the appeal has to be found not in concept but in execution. Jim Zub writes a breezy script with a lot of humour to it, and Nelson Daniel's art is clear and relatively energetic. This is by no stretch required reading, but if "Dungeons & Dragons comic book" sounds like a phrase with appeal to you then this first issue will likely satisfy. If terms like Ravenloft, Minsc and Boo sound like phrases to get you actively excited, then definitely check it out. (3/5)

Hot on the heels of issue #2 of 3 Devils comes issue #3. Tara and Marcus finally have a lead on the mysterious White Man, assuming Tara can get out of the saloon alive. Meanwhile a bounty hunter is on the trail. This third issue doesn't quite pack the punch of the first two, but does seem to have set itself up well for the future. Even at a slightly lower register it still proves a most entertaining western-horror hybrid. (3/5)
Posted by Grant at 5:46 PM