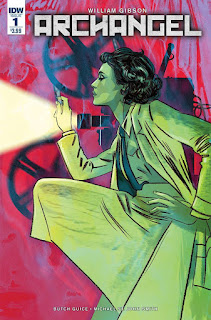 William Gibson has been a prominent and hugely successful science fiction author since the 1980s. While his Hollywood career has not been anywhere near as prominent - an X Files episode here, a disastrous adaptation of Johnny Mnemonic there - he is now expanding into yet another medium with his four-issue comic book miniseries Archangel. It launches this week thanks to IDW.

Villainous forces from a dystopian 2016 travel back in time to 1945 to change the course of history. Over in occupied Germany, a British officer and an American OSS agent are drawn into the investigation of a mysterious plane crash. The plane itself is of no design previously seen. Its crew are unlike any pilots either officer has seen before.

This is a great opening issue that introduces the storyline and the key characters in a wonderfully dramatic fashion. Gibson's dialogue feels naturalistic and smart, and it is brought to life by Butch Guice's excellent artwork (inked with Tom Palmer). Archangel started life as a television project, so it's no surprise to find it is a very filmic sort of a work. Fans of time travel, good science fiction or William Gibson should be running to grab themselves a copy of this one. (5/5)

Under the cut: reviews of The Shadow Glass, Spider-Man and Superman/Wonder Woman.

Spiritual summonings and intrigue await in this third issue of Aly Fell's supernatural fantasy. Since it started this series has skirted a relatively fine line. The art and period detail is beautiful. The story and dialogue has constantly hovered on the edge of being a little stereotypical - even tacky - and this issue it finally missteps fully. It is by no means unreadable, but it is remarkably mannered and stiff. It was also a surprise to hit a lesbian sex scene at the issue's climax. Tacky seems an appropriate word here too. (2/5)

This issue is basically business as usual for a Miles Morales Spider-Man comic. There's some great dialogue and character work, great artwork, a bit of action towards the end, and this weird glacial pace that just slides over everything and slows it down to a crawl. Brian Michael Bendis has a lot of fans, and I personally like a lot of what he does, but the pace of his books just kills me. A few more panels per page would not go awry. (3/5)

This penultimate part of "The Final Days of Superman" feels a little like filler, which is somewhat troubling given that there is only one issue to go and what seems like a lot of plot to wrap up. The glowing false Superman takes on the real Superman, Batman and Wonder Woman. Meanwhile the original DC Universe Superman takes Lois and his son to his 'Fortress of Secrets'. The art and dialogue are good, but really not a lot actually happens here. It feels like I have been short-changed. (3/5)
Posted by Grant at 8:56 AM