Star Trek: Deep Space Nine: "For the Cause" 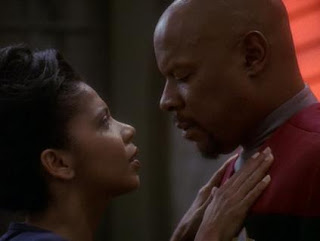 "For the Cause" is an exceptional but unusual episode of Deep Space Nine. For one thing it presents yet another challenge to the whole ideal of the United Federation of Planets, chipping away once again at the central theme of the Star Trek franchise and challenging its idea of paradise. Secondly it broadly eschews any focus on the regular cast to instead base its narrative around supporting players. While Benjamin Sisko (Avery Brooks) remains the protagonist, the bulk of the screen time seems devoted to Kasidy, Eddington, Garak and Ziyal.

The subplot, to get it out of the way: there's something quite troubling about Garak's sudden interest in Ziyal. Andrew Robinson does an exceptional job of making Garak wonderfully charming, but it's a charming that comes with a sort of wide-eyed psychotic glow in his eyes. We know his past, and we know the violent crimes of which he is capable, so when he begins taking a personal interest in the illegitimate daughter of his arch-nemesis Dukat it's impossible not to question his motives.

Tracy Middendorf, here taking over playing Ziyal from original actor Cyia Batten. She does a good job with it, and it's a pity this is her only appearance in the role. She is replaced next time by Melanie Smith. Ziyal and Garak forge an intriguing connection here that feels part friendship, part romance. Given he's clearly middle-aged and she is clear a teenager, that makes it an uncomfortable friendship to say the least - it's admirable that the episode presents it ambiguously and leaves the audience to their discomfort.

The episode's main plot, in which Kasidy is investigated for potential Maquis links, is a lot more direct and high in tension. Until this episode the series had sort of forgotten the Maquis (a breakaway Federation group of terrorists fighting the Cardassians). They were introduced back in Season 2 as part of a broad lead-in to sister series Star Trek: Voyager, but once Deep Space Nine began to focus on the Dominion and then the Klingons any chance of the Maquis returning seemed fairly remote. That they return here at all is somewhat surprising. That they return in such a dramatic fashion is remarkable.

There's an excellent diversion undertaken here, focusing the audience's attention on whether or not Kasidy is a Maquis smuggler. While the audience focuses upon that possibility, they ignore the real threat standing in front of them: it is not Kasidy who is the threat but Eddington. The Starfleet security officer has been a semi-regular feature in the series since the beginning of Season 3. At first he seemed an obvious character to have revealed as a Dominion spy, but instead he is a Maquis leader. Not only that but he actually succeeds in his plan at the episode's climax: this is the rare Star Trek episode where the good guys lose.

It would have been easy for the episode to reveal that Kasidy was not working with the Maquis at all, but Deep Space Nine is not a series to make too many easy choices. It turns out she is as guilty as she seems, and the episode concludes with her giving herself to Federation authorities. It is a wholly unexpected interruption to her and Sisko's romance, and powerful material with which to advance Sisko's character. He has lost the woman he loves, and been betrayed by her, but more significantly for him he has been betrayed by one of his own officers. His anger when he realises Eddington has escaped freely is palpable.

Kenneth Marshall gives a great performance as Eddington, and he receives the episode's best dialogue. He is allowed to openly challenge Sisko over Starfleet's fight with the Maquis: why does Starfleet care? Is it to help the Cardassians, whom the Maquis fight, or is it simply because the Federation cannot comprehend why any of its citizens would wish to leave it? As a follow-up to the earlier two-parter "Homefront"/"Paradise Lost" it works brilliantly. No one has ever questioned the concept of the Federation before. No one has ever considered the possibility that people might, for whatever reason, desire to leave it.

Had he been alive I suspect Gene Roddenberry would have loathed Deep Space Nine, as it visibly and repeatedly challenges all of the ideals that make Star Trek what it is. I actually think it makes the series the strongest re-iteration of those ideals. By challenging them, it forces itself to justify them. It emerges a stronger, more nuanced series as a result. This is a great episode; one of Season 4's absolute best.