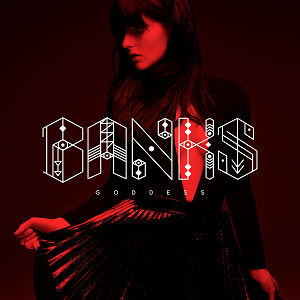 Jillian Banks, who simply performs under the stage name Banks, is an American singer-songwriter. Her debut album Goddess was released in 2014 and peaked at #12 in the USA Billboard charts. I have to admit I had not heard of Banks - although I had heard one of her songs quite a lot without knowing who was performing it - and only encountered a copy because my wife purchased it in error (I cannot remember what band she had misread the slightly ornate cover copy as).

The most striking thing about this album is how homogeneous it is: Banks has a very specific musical style, broadly categorised by the music press as either alternative R&B or trip hop. Her songs all seem to have the same combination of low, electronic tones and syncopated percussion. They have a slow, haunting quality to them. Liking Goddess almost entirely requires the listener to be a big fan of this sort of slow, Portishead-like musical style, because there really is nothing else that Banks presents here. It's great at what it is, but essentially that is all that it is.

"Alibi" nice variations in vocal pitch, and a solid introduction to the album. There is a combination of piano and electronica that works very well. The second song, "Goddess", subtly different. It almost shows off hints of Enya in its opening section, but rapidly slips down into being almost indistinguishable from "Alibi". Two songs in and the album already betrays its most distinguishing feature - which is that every song does essentially sound the same. That is either a positive or a negative depending on how much you like Banks' sound.

"Waiting Game" was Banks' original hit single, pre-dating the album by almost a year. It's instantly recognisable, having been something of an ear-worm through a combination of TV dramas and a high-profile Victoria's Secret commercial. While it yet again tracks the same musical territory as the first two songs it does so in a much more accomplished fashion. This is a great song: dark, sensuous and eerily effective.

From here listening to Goddess really is a matter of noting which minor variation of the one Banks song is which. "Brain" is a bit harder. "This is What it Feels Like" is a lot more like generic American R&B. "You Should Know Where I'm Coming From" is a piano-based version, with a fairly heartfelt and appealing chorus. That's sadly followed by "Stick", which is about as generic as it could get. "Fuck Em Only We Know" feels like a companion piece to "This is What it Feels Like", with a similar vibe and style. "Drowning" has a more electronic style to it.

"Begging for Thread" is a surprise: it's a bit faster and brighter, and feels like a much-required mid-album highlight. Critically it actually does sound different to every other song here. This is a more pop-inspired affair, with some beautiful vocal sections in the middle. Sadly with the next song, "Change", we are back in repetitive territory.

When the guitars start up with "Someone New" it's a relief, since the more acoustic qualities of the song allow some respite from yet more bleak electronica-backed moodiness. It's not an outstanding song, but in context it is very welcome. Fans of one-woman-and-a-guitar ballads will likely enjoy it a great deal.

Winding up the album are "Warm Water", another generic number, and "Under the Table", a piano-based power ballad that lacks the punch that it needs. It's a disappointing end to a very, very repetitive album.

I have to question, given how similar these songs are to one another, what purpose there was in packing a full 14 tracks onto the album. There is not much of a musical narrative running through here. It does not peak or fall, or provide sufficient variation. In all honesty a short collection of the seven or eight best tracks would likely have made a stronger album. Sometimes less really can be more.