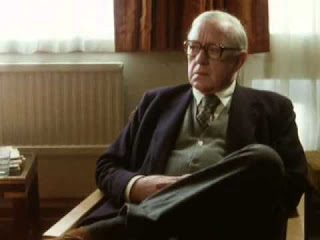 It is 22 October 1979 and time for the final episode of Tinker Tailor Soldier Spy.

Retired intelligence deputy George Smiley (Alec Guinness) has laid a trap for the Soviet mole inside the MI6 "Circus". With the traitor revealed, Smiley simply has one main question: why betray their country?

Perhaps the biggest surprise of this final episode of Tinker Tailor Soldier Spy is that in a 45-minute episode the mole is unmasked and apprehended within 10 minutes of the opening titles. The rest of the episode is dedicated to the fallout rather than the actual crisis itself. It is, on reflection, a typical move to make. A few episodes ago I referred to Tinker Tailor as a 'forensic drama', in that the real action has all pretty much already happened and the protagonist is primarily involved with picking up the pieces and making sense of it all. That is essentially the task of "Flushing Out the Mole": it gets the action out of the way as quickly as possible, so it can spend most of its time finally tidying up the whole story and showcasing the characters' reactions to it.

There is no real benefit in revealing the mole's identity: those who have seen the series or the film, or indeed the novel, will already know which of the Circus top brass it is. Those who have not seen or read the story really should go watch it for themselves: this has been a masterful adaptation and a brilliant series.

One element of this episode that showcases just good it has been is its tone. There is no real sense of triumph here. The mole might have been discovered and captured, but he is responsible for potentially hundreds of deaths over a long period of years. The damage to British espionage is near incalculable. Despite succeeding in his mission, Smiley simply seems vaguely depressed. Alec Guinness plays it beautifully, from the first encounter with the mole (Guillam is enraged, Smiley matter-of-fact) to his end-of-series reunion with his constantly unfaithful wife Anne (Sian Phillips).

I think the chief achievement of Tinker Tailor is showing a completely fresh side to the intelligence community; one that had not been extensively showcased on television or film before. I mentioned in one of the first reviews that this series premièred about 12 weeks after Moonraker was released in British cinemas. That was an over-the-top action film with Roger Moore jetting around the world and travelling into space, bedding women and casually shooting a whole bunch of bad guys on the way. Tinker Tailor has showcased a meticulous, calm and methodical analyst, slowly working his way through testimony and evidence to track down and apprehend a traitor. There's only one scene of proper action, and that is out of the way and done before the first episode is halfway through. Instead there are office politics, contrasting agendas, tense meetings of senior management and an awful lot of seedy, smoke-stained English hotel rooms. Tinker Tailor shows popular culture's less glamorous side of espionage, and it is all the more distinctive and dramatic for it.

At its centre is Alec Guinness, delivering a masterful performance that turned George Smiley into something of a television icon. His acting, so subtle and so wonderful calm, more than anything else turned this series into one of the landmarks of British TV. It sits very comfortably alongside I Claudius, or Edge of Darkness, or the more recent Wolf Hall, as one of the best examples of the medium. We tend to over-use terms like 'classic television', but this is almost inarguably a classic.
Posted by Grant at 7:34 AM