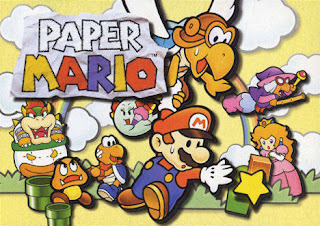 One of the more surprising titles released for the Super Nintendo was the Nintendo/Squaresoft collaboration Super Mario RPG. It was an unexpected blend of the Super Mario Bros characters and the gameplay of a turn-based role-playing game (RPG). While Nintendo moved from the SNES to the Nintendo 64, Squaresoft did not. The developer jumped ship to produce videogames for the Sony PlayStation instead. As a follow-up to Super Mario RPG Nintendo teamed with second-party developer Intelligent Systems, who had produced the console's Fire Emblem franchise, which had been very popular in Japan.

The gameplay of Paper Mario was rather simplistic, using a very sparse and easy-to-understand rule set. The player controlled Mario, and was assisted throughout the game by a series of companion characters - each of whom had particular powers and abilities to help unlock further areas in the game. There were eight companions in all: the player would use their assistance to once again travel through the Mushroom Kingdom of the Super Mario franchise, collecting and releasing seven trapped "Star Spirits" and rescuing Princess Peach from the perennial Mario villain Bowser.

Where Paper Mario excelled was in its visual aesthetic. The characters were designed as flat paper cut-outs, who looked two-dimensional but who would move through a three-dimensional world. The backgrounds and various settings would unfold like something out of a pop-up book. Upon release the game was compared - at least in terms of graphics - to Sony's popular PaRappa the Rapper rhythm action game.

It all made for an incredibly cute and enjoyable videogame. For experienced gamers it was perhaps a little too simple and unchallenging, but its smart and attractive graphics overcame a lot of that disappointment. For gamers who had never tried an RPG before, or found them a little too rules-rich and confusing, Paper Mario was the perfect gateway to the genre. Future sequels improved the concept considerably, making better use of the paper visuals and giving them better relevance in terms of gameplay. As far as Mario's RPG adventures went, a series of Mario & Luigi spin-offs for the Gameboy Advance and Nintendo DS were particularly enjoyable - and unexpectedly funny.
Posted by Grant at 5:00 PM