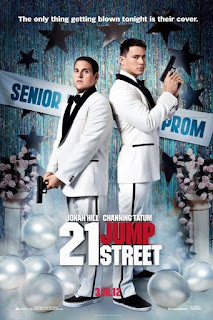 Schmidt (Jonah Hill) and Jenko (Channing Tatum) hated each other in high school, but eight years later they have teamed up as police officers. They are both assigned to the revamped "Jump Street" division, and are placed undercover in a high school to track down a teenage drug trafficking syndicate.

21 Jump Street is a huge surprise. On paper it seems a textbook method of making a film damn-near unwatchable. It is a comedy remake of a 1980s television drama in which young police officers go undercover in high schools to track down teenage drug dealers and car thieves. Today the series is best known for launching Johnny Depp's career, and is otherwise derided as one of the sillier 1980s TV shows without much in the way of longevity.

In practice 21 Jump Street is one of the funnier Hollywood comedies of recent years. It is packed with great jokes, huge helpings of satire and parody, and unexpectedly likeable and interesting characters. It undertakes an impressive tight-rope act of indulging in clichés while simultaneously mocking them. It is that magical kind of comedy that will appeal to the market that would typically enjoy what is advertised on the poster, but likely to appeal to a whole raft of viewers beyond that. This sort of thing is rare.

One key to the film's success is just how self-aware it is. A remake of 21 Jump Street is a terrible idea, but everyone involved - writers, directors, the cast - are all fully aware of how terrible an idea it is. There is little point in the viewer attempting to poke holes in the concept because the production team have pre-poked the holes for them. Yes a remake of a 1980s TV show lacks originality. No the storyline does not make sufficient sense. Yes the lead actors are too old to convincingly masquerade as high schoolers. It is a liberating experience, because with both the viewer and the film agreeing that the film is ridiculous at the conceptual level everything is freed up to simply be really funny.

Jonah Hill and Channing Tatum make great leads. Hill's comic talents have already been demonstrated in multiple films, notably Superbad, but it is Tatum who is the real surprise: he does not simply show off a gift for comedy, he positively excels at it. The two actors also share an incredibly strong chemistry, which helps to seal the friendship between the characters. It would be easy to make them mismatched partners - one a jock, the other a nerd - allow the stereotypical frictions to develop. Instead the film has both characters genuinely like one another. There is an unexpected warmth to the film - any fights between Jenko and Schmidt happen in a brotherly fashion.

The film draws a lot of material from just how radically teenage culture in America has changed from 2005 to 2012. Jenko, as the muscular anti-intellectual jock, finds himself unexpectedly adrift in a world of socially responsible teens. Schmidt, previously the Eminem-worshipping awkward nerd, now finds himself fitting right in. The film works these situations in pitch-perfect fashion to emphasise the humour. Some of the best jokes cannot even be described - it is well worth experiencing them for yourself.

Directors Chris Miller and Phil Lord have established themselves in remarkably short order as a pair of real talents in American screen comedy. Not only in this film great - and its sequel is arguably even better - they have always applied their skill to the animated films Cloudy with a Chance of Meatballs and The Lego Movie. They are currently working on Disney's Han Solo spin-off film. I am really intrigued at what they might create.
Posted by Grant at 5:01 PM