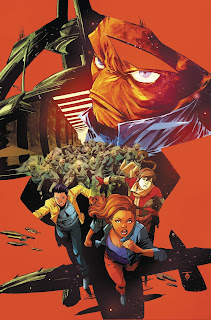 Uma, Dewydd and Katrin are three teenagers who have managed to escape the quarantined and oppressive planet Earth, steal a spacecraft and head off to explore the universe. They begin this second issue running for their lives through an alien shopping mall.

Joyride, by writers Jackson Lanzing and Collin Kelly and artist Marcus To, is an exceptional space opera. It is brightly designed and illustrated, boasts three well-defined and likeable characters, and has a story that is both fast-paced and nicely fleshed-out. I like a good science fiction comic, and now that we're two issues into this four-issue miniseries I am happy to claim this as one of the best being published at the moment.

It really is great value for money. The panel-per-page ratio is high, which leads to both a lot more plot than other single issues as well as many more opportunities for the characters to be explored. Literally the only criticism I have right now is that the book's only scheduled for four issues. At this stage I really quite desperately want either an extension or a sequel. Either would do. I just want more opportunities to see and explore this hugely entertaining set-up and cast. (5/5)

The "Batgirl of Burnside" era comes to an end with a bright, breezy finale packed with the entire supporting cast of Batgirl. There are more strong, engaging and entertaining female characters in this issue than one could poke a stick at - including the cast of Gotham Academy. I have really enjoyed this most recent take on Batgirl, and I really hope that in shifting to a new volume and a new international jet-setting storyline that DC doesn't lose the positive, energetic and enormously likeable identity they have given the book here. (4/5)

Elektra has come to Daredevil in a rage, accusing him of kidnapping her previously unknown daughter. It makes no sense, and while the rest of the issue explores what is really going on it does not go much until how or why. I assume this will be dealt with in a future issue. Matteo Buffagni's art and Matt Milla's colours are great. My issues with this book pretty much remain: we're back in the miserable world of 1990s Matt Murdock, where everything goes wrong and he feels guilty all the time. While it's a familiar and popular space for the character, there is only so much self-flagellation he can go through in a row before I begin to get a little bored. There's also the frustration of Matt's mysterious return to having a secret identity, which seems to be referenced every issue but with no explanation as to how. We're up to issue #7 now: the lack of information is getting tiresome. (3/5)

Empirakul has invaded the planet and destroyed almost all magic. Now Stephen Strange, the Scarlet Witch and a small group of other de-powered magicians have banded together to find whatever magic remains to help them fight back. There's a nice sort of post-apocalyptic feel to this storyline, which is pretty remarkable given that the bulk of the planet Earth is just going on about its day without even knowing something is going on. This issue felt good: it differentiates what's going on with what seemed like a very similar storyline by Aaron back in Thor: God of Thunder. (4/5)

There is a big "The Road to Civil War II" banner on the top of this issue's cover, and these kinds of event crossovers and tie-ins are what usually get me quitting a superhero book as fast as you can say "Secret Wars". Or "Secret Invasion". Or basically name your Marvel crossover. When these things hit it's basically a case of waiting three to four months for your favourite book to come back and stop wasting its time on aimless side-stories that readers don't need to see. Thankfully asides from a weird epilogue there doesn't seem to be much here that's getting in the way of a really fun story. New Jersey and New York high schoolers competing at a science fair: which means Kamala Khan going up against Miles Morales. It is the romance nearly every Marvel reader seems to want to happen, starting to happen. I adored every page. (5/5)

Yet another comic book ending this week; I think this is the fifth so far? In this tidy action-packed wrap-up, Obi-Wan Kenobi and young Anakin Skywalker must prevent two rival armies from killing each other. Like much of the other issues in this miniseries, it is entertaining stuff with great artwork but does not quite manage to excel. Nonetheless if you are a Star Wars enthusiast and are looking for a solid prequel-era adventure, then Obi-Wan & Anakin absolutely suffices. I do enjoy the way Marvel has showcased numerous characters in their own five-issue miniseries. First Leia, then Lando, then Chewbacca. It's Han Solo next. (3/5)
Posted by Grant at 9:59 AM