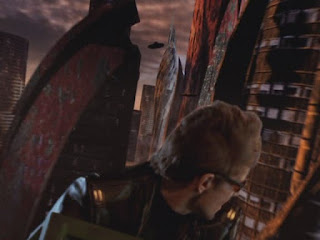 It's 4 August 1999, and time for another episode of Crusade.

An Excalibur crew member is killed while surveying a long-dead planet, leading Gideon (Gary Cole) and his crew to discover that the planet is not as dead as they had been led to believe. Its inhabitants may hold the cure to the Drakh plague - if only Gideon could find them.

A bit of production history is needed to better explain "Racing the Night". After the first few episodes of Crusade had been shot, broadcaster TNT demanded some changes and retooling of the series in return for a modest budget increase. They also wound up taking those early episodes - which TNT executives did not particularly like - and shifted them back to the second half of the series. The result was that there's a lot of Crusade that simply doesn't make a lot of sense, because characters occasionally refer to things that have not happened yet, or their interpersonal relationships shift from hot to cold and back on an episode-by-episode basis. "Racing the Night" was shot with the expectation that it would be the second episode broadcast, but instead it was presented as ninth.


It is rather off-putting seeing an episode where Eilerson (Max Allen Brooks) is still a cold, mercenary character, rather than the more engaging and identifiable person he had been more recently. The entire crew seem a lot more new and uncertain, without any of the looser, more familial vibe to which I had become accustomed. Both Dureena (Carrie Dobro) and Galen (Peter Woodward) have suddenly returned after what feels like quite a gap.

There is also the tone, which really does feel a lot more like Babylon 5. There is a mystical alien civilization, moral quandaries, slightly too self-aware dialogue, and the obvious setting-up of long-running story arcs. Gideon's mysterious "apocalypse box", which was first seen back in "The Path of Sorrows", makes a second appearance. It is obviously the beginning of something rather ominous, but with only four episodes remaining before Crusade was cancelled I am assuming we will never learn what it was.

There is a fairly decent science fiction concept at this episode's heart: a civilization was infected with the same plague as Earth a thousand years earlier, and when they could not find a cure they placed their entire population in suspended animation and left behind a planet-sized mechanical operation to tempt down alien spacecraft, dissect the occupants and absorb their scientific data. Sadly it is partially derailed by typically poor dialogue, a climax that effectively involves an alien standing around and explaining the plot, and a fairly hilarious over-confidence in computer-generated visual effects. It winds up feeling rather disappointing.

Nine episodes in, and Crusade has managed four good episodes. Despite some premise, "Racing the Night" was not one of them. The quality ratio drops to 44 per cent.
Posted by Grant at 10:12 PM