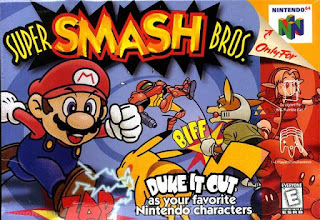 When Nintendo announced that it was releasing a fighting game based around its various corporate characters it seemed a difficult announcement to believe. While fighting games had become a remarkably popular genre of videogame through such franchises as Street Fighter, Tekken and Virtua Fighter, that sort of game seemed fundamentally incompatible with the bright, child-friendly stable of Nintendo heroes include Mario and Luigi, Kirby and Pikachu. In typical Nintendo fashion, however, Super Smash Bros took the basic concept of the fighting game and then re-fashioned it into something distinctive, family-friendly and packed down to the bone with a charming Nintendo identity.

The key manner in which the game avoided the more blunt violence of the traditional fighting game was in its victory conditions. The aim was not to beat an opposing character unconscious but rather to simply knock them off a platform. It transformed the feel of the game from one of fighting to one of play: there is a wonderful sense of playground games about Super Smash Bros. No real harm, just winning and losing the round.

The game also gained huge appeal by blending the various Nintendo characters and settings together. Fighting arenas were based around key franchises, with 12 playable characters also drawn from them. It was the videogame equivalent of a child playing with different sorts of action figures together: there was no need for it all to make sense, and it was simply huge fun playing Mario against Link, or Kirby against Fox McCloud, or Jigglypuff against Donkey Kong.

Like most fighting games it was much more enjoyable played as a multi-player game, particularly since it allowed four players to fight against one another at the same time. There was a sense of chaos to a four-player match, and it made the fairly simple control mechanism a godsend. Complicated controls on top of the complicated sight of four characters jumping and smacking their way around the screen would have probably been too much for a popular audience.

Super Smash Bros has been followed by sequels on every subsequent Nintendo console. The character roster has expanded tremendously to include all manner of third-party characters, but the gameplay has - as is Nintendo's general wont - remained pretty much the same. With the impending release of the Nintendo NX console in 2017 I have no doubt that another iteration is on its way.
Posted by Grant at 7:35 AM