Doctor Who: "A Change of Identity" 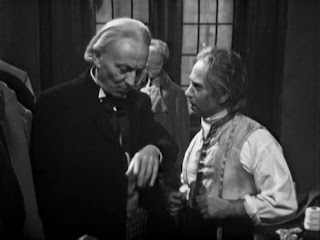 In this third episode of "The Reign of Terror", Barbara (Jacqueline Hill) and Susan (Carole Ann Ford) are scheduled to be executed by the guillotine. Ian (William Russell) remains trapped inside the Conciergerie. The Doctor (William Hartnell), presumed dead by his companions, finally arrives in Paris in the hope to rescuing them all.

There is a weird tension going on in "The Reign of Terror". Part of the serial is an obvious and - to be honest - fairly unenthused pastiche based on Emma Orczy's The Scarlet Pimpernel. It is regularly peppered with comedic interludes, however, such as the Doctor's adventure with the road gang in the last episode or his encounter with a Parisian tailor here. The two styles do not gel together very well, and the effect is a little like watching two different episodes simultaneously. There are enjoyable parts to the episode, but overall it feels somewhat tiresome and awkward. This is not Doctor Who at its best.

That aside, it is fair to say that William Hartnell seems to be having a ball. The Doctor has never seemed so purposeful or energetic, and he seems to really enjoy his various encounters on the road to Paris. Here he even gets to play dress-ups, masquerading as provincial commander in the attempt to bluff his way into the Conciergerie prison. His scene with a local tailor (John Barrard) is the episode's highlight - and if in a science fiction adventure series a scene of the protagonist buying some clothes is your episode's best scene you are probably in a bit of trouble.

Barbara and Susan are rescued from their guards by the counter-revolutionaries Jules and Jean, and taken into hiding at a nearby safe house. While Jacqueline Hill is given plenty of material with which to work, including yet another suggestion of romance - this time with the spy Leon Colbert (Edward Brayshaw) - it is fair to say that Carole Ann Ford is effectively thrown under a bus. Susan mopes and cries, she gives up and accepts her execution despite Barbara's insistence they try to escape, and generally acts miserable. After the wonderful pro-active material Ford was given in "The Sensorites", "The Reign of Terror" seems like a dreadfully retrograde step. It is not a surprise she departed the series a few weeks later - as an actor it must have been deeply disappointing. Meanwhile William Russell only appears briefly here via a series of filmed inserts - he was away on holiday, and these scenes were shot in advance.

The inconsistency in tone, and the dreadfully poor treatment of Susan, make "A Change of Identity" a deeply disappointing episode. It simply does not gel together in the way earlier episodes have done. It leaves Doctor Who's first series with 26 good episodes out of 39 - with three more to go. The quality ratio slips slightly to 67 per cent.
Posted by Grant at 4:59 PM