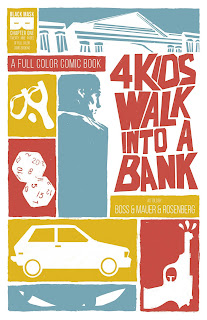 Black Mask Studios is an independent comic publisher that has already published a bunch of great comics, but they have really hit the ball out of the park with their latest five-issue miniseries 4 Kids Walk Into a Bank.

Daniel, Pat, Walter and Paige are four twelve year-old kids who suffer the usual issues that twelve year-olds face - until a group of suspicious gangsters turn up at Paige's house looking for her father. From there it's an odd combination of The Goonies and a British crime flick, as Paige and her friends follow and investigate these unusual, dangerous men.

There's not a thing about this comic that is not perfectly pitched. The tone is great, the dialogue is tightly written and memorable, the art and panel layouts are bold and dense. There's a lot of story packed into 28 pages, which is exactly the sort of thing I like in a comic book. There's already been a lot of critical buzz around this series; hopefully it's profile will boost Black Mask's titles in general. They deserve the attention.

Under the cut: reviews of Batman, Ms Marvel and We Are Robin.

Since the launch of the New 52 Greg Capullo and Danny Miki have been providing stunning artwork for Batman, contributing in no small part to that book's high reputation and popularity over recent years. This marks their final issue on the title, and it's a beautiful epilogue to the entire run they have shared with writer Scott Snyder. This is a remarkably elegant act of putting all of the Batman toys neatly back in the box before handing the title over to a new creative team in June. Some readers might get frustrated at how all of the key elements of the Batman mythos have been effective reset, but this really is the way these ongoing endless pop culture stories work. It's a great conclusion to a stunning run. (5/5)

Kamala has to fight a giant clone of herself in a battle involving a tyrannosaurus rex, the god Loki, Captain Marvel and Iron Man. It's great stuff, packed with humour and lovely character moments, and providing Kamala with some great development along the way. G. Willow Wilson has perfected such a nice tone for this book, with a really natural combination of superhero antics, comedy and heartfelt personal drama. The way she writes Iron Man in particular is a highlight. (5/5)

Smiley and his gang break into Middletown High and take hostages, while the disbanded and disaffected Robins struggle to reunite in their hour of need. This is a great climax to the "We Are Jokers" arc, rebuilding the damage done to the team during Robin War and setting them up for the future. It's also the second-to-last issue for this series. While it's unfortunate that, like fellow DC series The Omega Men, it never found a long-term audience, the team still exists now as yet another resource for DC's broad range of Batman comics going forward. I hope they get used well - and soon. (3/5)
Posted by Grant at 9:45 AM