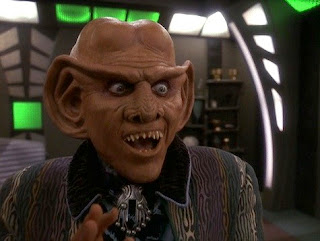 It is 10 June 1996 and time for the penultimate episode of Star Trek: Deep Space Nine's fourth season.

Quark (Armin Shimerman) has been diagnosed with a terminal disease, and begins to put his affairs in order. By the time he learns his diagnosis was made in error, it may already be too late to save him. An accident on a runabout puts Keiko O'Brien (Rosalind Chao) in danger, and Dr Bashir (Alexander Siddig) is forced to transport her unborn baby into a new host: Major Kira (Nana Visitor).

Season 4 gets one more Ferengi comedy, so the usual caveats apply. In this case it has a surprisingly serious element to it, one that really lifts the episode up from mediocrity into something rather special. At the same time the episode has a truly bonkers sub-plot involving swapping a foetus from one woman to another with a transporter. I honestly cannot say whether I like that idea or not, but certainly the way it is executed is bizarrely twee. It is, all in all, a mixed experience.

The background to Kira's sudden pregnancy is that Nana Visitor fell pregnant (to Alexander Siddig, no less), and rather than try to shoot around it or independently give Kira a baby the idea was developed for Keiko - who had already fallen pregnant earlier in Season 4 - to suffer an injury and for her and Miles' baby to be transferred to Kira's body. How that is actually possible beggars belief. It is standard practice for Star Trek's science to be fairly nonsensical, but this one feels even less believable than usual.

Obviously it is all a bit of a shock for both women, but instead of really delving into that side of the storyline the episode focuses on Miles and Keiko begging Kira to move in with them during her pregnancy so that they can be close to their baby. It all makes Miles and Keiko come across as a little bit creepy. The manner in which they approach Kira with their proposal feels more like a couple awkwardly inviting a friend over for some kind of three-way sexual encounter. It is all perilously close to car-crash television.

Quark, meanwhile, learns that he is going to die, auctions off his own desiccated remains on the Ferengi stock market, learns that he was misdiagnosed and is perfectly healthy, and then winds up in the mother of all pickles when he learns his entire remains were purchased by arch-nemesis Brunt (Jeffrey Coombs) who refuses to accept a refund. As law demands that all contracts between Ferengi are binding, Quark is left with the choice of either killing himself to satisfy Brunt's agreement or being exiled for life from Ferengi society.

Deep Space Nine does such a good job with the Ferengi. They were handed a culture from The Next Generation that was not only deeply sexist and generally unpleasant, but also visibly playing off anti-semitic stereotypes. From there the DS9 writers room has re-developed the Ferengi civilization into... well not something that's any less unpleasant, but certainly something that actually makes a certain kind of logical sense. They have gained a religion, a history and a more original and distinctive culture. It plays brilliantly here, because Quark actually considers going through with arranging his own death because the alternative - betraying Ferengi law and custom - is too horrifying to bear.

The episode's conclusion is a little too heart-warming for its own good, but it gets a lot of mileage out of Armin Shimerman and Max Grodenchik's (Rom) comedic talents. It leaves Quark in an oddly similar position to Commander Worf (Michael Dorn): an exiled pariah from his own people, at least for the time being. Both men have the support of their friends and colleagues, but sooner or later both are going to want to restore their family honour. Add Garak (Andrew J. Robinson) to the list - he shares a great scene with Quark in this episode - and Deep Space Nine seems to be gradually filling up with exiles.

All up, "Body Parts" has a lot of good stuff in it involving Ferengi and a fair measure of the oddly awful involving Kira and the O'Briens. Overall it works. It is 15th good episode out of 24, giving Season 4 a quality ratio of 63 per cent with one episode to go.
Posted by Grant at 4:57 PM