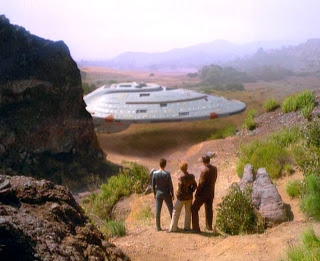 When the Voyager investigates an automatic distress beacon, they discover an early 20th century truck floating in space - and a nearby planet where a group of abducted humans have been cryogenically frozen for several hundred years. For Captain Janeway it's an opportunity to meet one of her idols face-to-face, but for these abducted and displaced humans there's a bigger problem. Do they stay in the Delta Quadrant or join the Voyager on its journey back to Earth?

I've been reviewing episodes of Enterprise and Star Trek: Deep Space Nine, and the other night - pretty much on a whim - I watched an episode of the series that came between them: Star Trek: Voyager. I'm actually pretty fond of Voyager. It's probably the most superficial and breezy Star Trek series, but it's amiable fun and when it works well it's pretty entertaining stuff. "The 37s", the first episode of Voyager's second season, does not work well. It does not work well at all.

Oh goodness, watching this episode is like having your brain extracted Ancient Egypt-style with a spoon via the nose. It's painful, difficult and pretty much guaranteed to make you a stupider person at the other end. It's made worse by the fact that this episode (and three others) was held over from the production of Voyager's first season and wound up opening the second. As a random episode of Star Trek it's pretty tedious stuff. As a season premiere it's a disaster.

I can't stand it when a Star Trek episode indulges in cheesy nostalgia for 20th century America, and it wallows in nostalgia here. Lt Paris suddenly becomes an aficionado for early 20th century automobiles - a subject that his comrades are curiously ignorant about in even the sketchiest of terms. They haven't heard of gasoline, and they haven't ever seen a truck before. That's like a contemporary viewer of the series not known what a horse and cart is. It's ridiculous, and for the sake of an early scene of not particularly funny comedy it makes the entire lead cast of the series out to be complete morons. Then there's Captain Janeway's strange situation in which she's ignorant of 20th century Earth yet idolises famous aviatrix Amelia Earhart.

Not only is the episode a tedious viewing experience, it's not even an original one. A near-identical story was produced at the end of Star Trek: The Next Generation's first season ("The Neutral Zone"), and to be honest it didn't work particularly well then either.

There is a fantastic bit of unintentional comedy in the episode as well, in that they land the Voyager for the first time. It sits on the ground using these ridiculously inappropriately tiny feet, and it's clear the production team know it because they do their best to hide the bottom of the ship for the entire time it's on the surface. Once you start thinking of Austin Powers' notorious nude scenes, where Mike Myers' genitals are carefully obscured from view in every shot, it's hard not to laugh.
Posted by Grant at 12:12 AM