Doctor Who: "The Dead Planet" 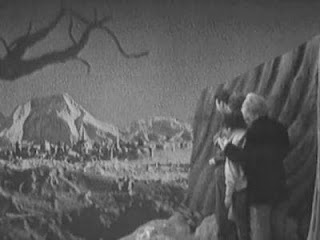 The TARDIS materialises in a massive petrified forest, where some cataclysmic event has turned all of the plants to stone. The Doctor and his companions also spot a deserted alien city in the difference: the Doctor wants to explore, but Ian and Barbara insist he returns with them to the TARDIS and take them back to 1963. The Doctor, however, is not beyond a bit of deception to get what he wants - a decision he may come to regret.

"The Dead Planet" is, of course, almost as famous an episode of Doctor Who as "An Unearthly Child", because it's the first episode of the first Dalek serial. Truth be told the only thing we see of the Daleks in this episode is a rubber plunger on a stick during the cliffhanger. This is still the beginning of Doctor Who's first great change though: the BBC's Head of Drama Sydney Newman was very specific when he devised the series that it wouldn't contain 'robots' or 'bug-eyed monsters'. The Daleks are, of course, a cross between the two: bug-eyed monsters hiding inside robots. Whatever series was supposed to be created, those plans pretty much got radically altered from here-on-in.

I think there's a risk of people overlooking this episode, since it's basically "that episode before we first see the Daleks". Taken on its own merits it's a wonderfully creepy and stark half-hour of science fiction. The Doctor and his companions arrive in a deserted, petrified forest and for the most part there's no one else there. The question of what awful thing happened to destroy all life in the forest is never far from our minds, and the sense of mystery only increases when the TARDIS team start exploring the nearby city (first seen, I must say, via some very impressive model work). The city still has automatic, powered doors, and in one deeply unsettling moment a robotic eye fixed into a wall silently turns to observe Barbara as she walks past.

Basically the whole episode is constructed to build tension: a dead forest, then the discovery of an alien city, then Susan thinks someone was following her through the forest, then they find a box of pills mysteriously left on their doorstep, then the city - still active after who knows how long - and finally the unseen robotic assailant that threatens Barbara at the end.

The regular cast show some development here: Ian and Barbara are a lot more assured in their second journey outside of the TARDIS, and certainly they're a lot more wise to the Doctor's behaviour. When he fakes a TARDIS fault to sneak a look at the city, I'm not sure either Ian nor Barbara believe him - but they do reluctantly humour him.

Susan meanwhile panics and cries about being followed through the forest, and certainly doesn't behave in the way that "An Unearthly Child" had promised: the smart, ultra-experienced, vaguely weird alien kid of the first episode has pretty much vanished now in favour of a more cliched troublesome teenager. It's a shame, because the character never really recovers. When this serial was remade for cinemas by Amicus Films, the character of Susan was re-envisaged as a plucky ten year-old girl (Roberta Tovey) and it's that Susan who remains one of my favourite Who companions. This original Susan simply isn't up to scratch - I feel badly for Carole Ann Ford, who played Susan, since the writers clearly let her down.

This is a great episode, and gives Doctor Who Season 1 its fourth good episode out of five: 80% and counting.
Posted by Grant at 9:11 PM