Doctor Who: "The Cave of Skulls" 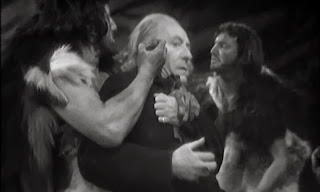 The TARDIS has materialised in prehistoric Earth. While Ian and Barbara struggle to come to terms with the journey they have undertaken, the Doctor heads off on his own to take rock samples and measure the surrounding radioactivity. He is soon kidnapped by the caveman Kal, who aims to force the Doctor to create fire and grant him supremacy over his tribal leader Za.

In retrospect it seems an odd choice to make the first adventure of Doctor Who about cavemen trying to make fire, when it could easily have been an adventure on another planet or a fight with the Daleks or somesuch. To think this, however, is to forget that this is not Doctor Who as we know it yet. The rules are still being made up as the series goes along. Instead we get something much starker and more adult. Ian and Barbara don't take TARDIS travel in their stride: they are overwhelmed, confused and visibly terrified. When the Doctor is kidnapped and threatened by a tribe of cavemen, he doesn't fob them off with a trick or a witty line of dialogue: instead he's a terrified old man who visibly believes he's about to get murdered by a screaming pack of savages wielding stone axes. When Susan realises the Doctor has gone missing she goes into a full-blown screaming panic. This is early Doctor Who. There are no rules, and we - and the Doctor - must slowly find the series together.

Episodes two to four of "An Unearthly Child" generally get dismissed by Doctor Who fans, as if they're a three-week annoyance between the iconic first episode and the equally iconic arrival of the Daleks in the following story. If we ignore thatgenerally accepted opinion, however, we find a unique serial in the 50-year history of the series. There simply isn't another story like it.

You can generally split early Doctor Who stories into one of two broad types: there are the science fiction serials - The Daleks, The Sensorites, et al - and the historicals - Marco Polo, The Reign of Terror and so on. An Unearthly Child is different: it's not about history, but prehistory. For all intents and purposes the TARDIS team may as well be on a different planet. (In fact, I do wonder if this serial would be better received by fandom had the Tribe of Gum been rubber-suit monsters trying to discover fire instead.)

Precious little ever seems to be said about the Tribe, who feature some impressive writing and acting. Everyone in this story speaks English, but the TARDIS characters and the cave dwellers struggle to understand each other. It's a neat, subtle conceit that helps to establish that these primitive humans really are primitive. Coburn also establishes the power struggle within the tribe with efficiency and clarity: they used to have fire, but the ability to make it has been lost. The Ice Age is closing in, and the nights are getting colder. Za leads the tribe, but only tenuously, and the powerful warrior Kal is making moves to take over. It's a little Shakespearean drama in loinclothes and furs, and well performed by Jeremy Young and Derek Newark. Eileen Way is also excellent as Old Mother.

You would be hard-pressed to recognise the Doctor from William Hartnell's performance here. He's visibly terrified, clearly out of his depth and apparently incapable of lighting a fire without matches. In the context of the original broadcast, he comes across as an autocratic old man who is selfish, thoughtless and prone to panic. In the context of the 50 years to come, he seems so young. He's inexperienced and lacks the strong moral compass that will guide him through subsequent seasons. You get the impression that, while he may have been travelling through time and space for a while, he's never been in so much danger before. Things such as morality, compassion, leadership and bravery are left to Ian and Barbara - as noted in my review of the first episode, they are the stars of this series and not the Doctor at all.

By the episode's conclusion, all four time travellers have been captured and sealed inside the "Cave of Skulls". Ian notes, and we see with disturbing matter-of-factness for a family drama, that the cave is littered with human skulls - all of which have been violent caved in. Next: "The Forest of Fear". Another good episode, leaving Doctor Who Series 1 at 100%.
Posted by Grant at 8:31 PM