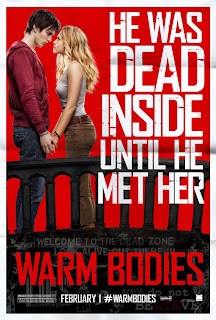 R hangs out at the airport. He doesn't do too much, and just wanders around the terminal each day. He does have a friend, but they don't talk much. He doesn't wash, he doesn't really change his clothes, and his hair is a mess. He can't even remember his own name. This is because R is a zombie, and he's the star of a fairly unexpected teenage romance.

Warm Bodies is the latest addition to one of cinema's more unusual genres, the zombie comedy. Shaun of the Dead and Zombieland were both fantastic films, depicting romantic comedy within the framework of a zombie-infested apocalypse. Warm Bodies takes the idea one step further by making one of the two romantic partners a zombie. It's one of those ideas that sounds like it's either going to be really, really stupid, or really, really gross. Instead it winds up being only moderately stupid, but also incredibly funny, and it manages to be mildly gross, but also incredibly funny. I really enjoyed this film. I'm not sure what I was expecting, but what I got entertained the hell out of me.

Nicholas Hault gives a gut-bustingly funny central performance as R, a romantic and courageous young man trapped in the rotting body of an undead monster. The film uses voiceovers extensively, and the contrast between R's inner monologue and his physical lurchings is the source of most of the film's comedy. His co-star Teresa Palmer, who I was pleased to learn is a fellow South Australian, gives a strong performance as well, giving a lot of heart and believability to what could easily be an untenably silly premise. To an extent he channels Johnny Depp as Edward Scissorhands, and to an extent she channels Kristen Stewart as Bella Swan, but they're both approaches that work.

Another aspect of the film I appreciated was its occasional use of social commentary, cleverly buried in among the broader comedy and the romance. There's a beautiful moment early on where R (via voiceover) laments the death of civilization and the loss of human contact, and we momentarily shift into the past when the airport is bustling with humans - all ignoring each other while reading their mobile phones. It's a nice touch, and lifts the material beyond simple humorous shenanigans.

There are a few interesting ideas thrown in about the zombies. For one, they eat brains because it allows them to experience fragments of their victim's memories - basically the only means by which the zombies can feel anything any more. For another there are the 'bonies': zombies that have rotted and dessicated to the stage where they're simply blackened skeletons rampaging around the city trying to eat people. I love that some new concepts were introduced: it helps to make the rest of the story work, and enables the narrative to be told in a slick, streamlined manner.

You could nitpick Warm Bodies if you wanted to. It doesn't tell an exceptionally original story - basically Romeo and Juliet rewritten for zombies and humans. The production team take pains to ensure R is never a particularly unattractive zombie. These really would be nitpicks, though: all in all this is a clever, engaging and funny movie. I think it may be one of my favourite films for 2013.

Warm Bodies is based on Isaac Marion's novel, which I have not read. Given how much I enjoyed the film, I'm inclined to track a copy down.
Posted by Grant at 1:08 PM