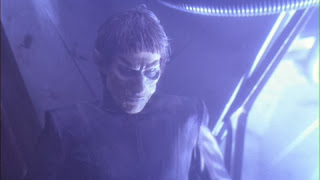 While the Enterprise continues to search the Delphic Expanse for the Xindi, the crew receive an automated distress call from a lost Vulcan science ship. Archer leads an away mission into a hazardous asteroid belt to search for survivors - only to find himself trapped on the decaying Vulcan ship and on the run from it's insane and murderous crew. Time is running out, because whatever is affected the Vulcans has started to affect T'Pol as well.

At last a half-decent episode. "Impulse" is a zombie thriller masquerading as an episode of Star Trek, with the requisite small band of survivors fighting their way out of a lurching mob of rotting, mindlessly angry enemies. Of course in this case the survivors are Captain Archer and his away team, and the zombies are the insane crew of a Vulcan exploratory vessel, but basically the same tropes work regardless.

The real star of this episode is David Livingston's direction. The veteran Trek director brings all of his skills to imbue "Impulse" with a tremendous amount of energy and tension. This tension begins with a stunning in-media-res teaser scene, throwing the viewer into the action with a screaming, murderous T'Pol being restrained by Archer and Phlox. After the credits we're thrown back 24 hours to find out what on Earth is going on. It's a technique well used by J.J. Abrams in his TV dramas (notably Alias), and it's nice to see it get used here. It's also, if you're keeping record, the shortest teaser scene in Star Trek history, clocking it at just 18 seconds.


The episode makes good use of Season 3's overall arc as well. We've known about the risks of trellium-D exposure for four episodes ahead of this, and have already seen video recordings of one starship full of insane Vulcans (a starship that, ironically, entered the expanse purely to rescue the vessel the Enterprise stumbles upon here). For once, rather than simply chaining along a string of episodes about the Xindi, we're getting rewarded for being regular viewers. The casual viewer will still get an entertaining episode to watch, but the regulars get some added value: it's a richer episode as a result of the arc.

We're five episodes in, and two of the episodes have been good: that means a quality ratio of 40%. Season 3 is still looking shaky as hell, but for now I can at least claim it's improving.
Posted by Grant at 6:50 PM