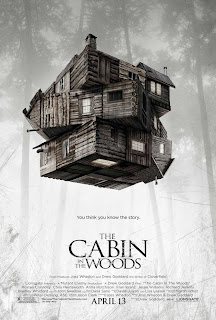 Five American college students drive out to an isolated forest cabin for the weekend - only to find themselves hunted down by the undead family that lived in the cabin a century earlier. As they run for their lives, they begin to realise something more disturbing is at work: the entire situation has been artificially stage-managed by a team of technicians from an underground facility beneath them.

The Cabin in the Woods was, by their own admission, written by Joss Whedon and Drew Goddard in three days. It shows. It's a film with a fairly neat central concept, and a bug-eyed over-the-top climax, but which flounders for more than an hour before reaching the fun bits. It's a dreadful case of a nice idea being ruined by a sloppy execution. Elements that should be jaw-dropping twists are openly revealed much too early, and weak characterisation makes key plot developments murky and ineffective. The writers are clearly more in love with some of the characters than they are with a tight narrative, which is pretty much the kiss of death for a horror movie.
If the film hadn't been co-written and produced by Whedon - still science fiction fandom's cause célèbre - it's unclear whether anyone would have reacted to this film at all. Since it was written by him, a lot of fans seem ready to leap to the film's defence. Let me challenge them: this emperor has no clothes. Whedon, a one-time writer of great talent and entertaining self-awareness, has been running on automatic now for close to a decade. His tools are getting rusty and his scripts predictable. As an experiment, my wife and I started trying to recite the film's dialogue ahead of the characters. We got it right every time.

In the last half hour the film certainly picks up an awful lot, and there's a lot of fun to be had with just how deliberately silly it all gets. By that point, however, it's all very much as case of 'too little, too late'. There's also the question as to why a plot-critical button on a console even exists at all. In a better movie you wouldn't have time to nitpick - in this film there's time to nitpick an awful lot.

At his best Joss Whedon is one of America's most talented screenwriters, and Drew Goddard demonstrated via Cloverfield that he can be an inventive director. The Cabin in the Woods shows neither of them at their best.
Posted by Grant at 9:00 AM