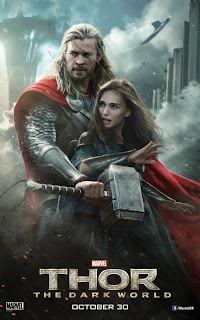 I absolutely loved Thor, Kenneth Branagh's 2011 fantasy adventure film that introduced the Marvel Universe's heroic God of Thunder to the big screen. While the film wasn't to everybody's tastes, I adored the rich theatrical tone, the larger-than-life characters and the wonderful seam of humour laced through it. The film was also a crucial step in developing Marvel's massive 2012 hit The Avengers, since it also introduced that film's immensely popular villain Loki (Tom Hiddleston).

This sequel, directed by Game of Thrones' Alan Taylor and reuniting Hiddleston's Loki with Thor (Chris Hemsworth), Odin (Anthony Hopkins), Sif (Jaimie Alexander), Jane (Natalie Portman) and Eric Selvig (Stellan Skarsgard), is a slightly different take on the franchise, but it's still over-the-top, rich in colour and enthusiasm and retains that essential element of fun that made the original work for me so well.

The Dark World sees the Dark Elves, led by the villainous Malekith the Accursed (Christopher Eccleston), lay siege to Asgard as a conjunction of the 'nine realms' allows them to enact a plan to destroy the universe and replace it with their own. Nothing like aiming big for your sequels. Thor saw the titular god fighting to save Asgard. The Avengers had him help save the Earth. Now he's tasked with saving the universe. No pressure.

It's not necessarily accurate to describe The Dark World as superior to Thor, but it certainly a much easier film to digest. We're already familiar with the characters, for example, and it's interesting to note that the Thor films have a much larger supporting cast than any of the other Marvel franchises. Returning in this film are Thor, Jane, Darcy, Eric, Loki, Odin, Heimdall, Sif, Volstagg, Fandral, Hogun and Frigga. This expansive cast really helps fill the film out and allow it to feel like something truly epic. Also effective is the introduction of much more science fictional designs and technologies: the result is that The Dark World feels very much like the love child of The Lord of the Rings and Star Wars. That's a nice place for a Hollywood blockbuster to position itself.

If there's an aspect in which the film is less successful it's probably in its treatment of Malekith. As he was the principal antagonist of the film I wanted to see more of him, and give the character room to show some depth. Unfortunately, with the immensely (and understandably) popular Loki still hanging around it's difficult for Malekith to emerge from under his shadow. This problem is despite a very strong performance by Eccleston, who not only has to emote under a layer of prosthetic makeup but perform most of his lines in a fictional language as well.

Marvel Studios are rapidly positioning themselves as the live-action equivalent of Pixar Studios: a regular stream of well-reviewed and critically acclaimed blockbusters, inspiring audiences and earning hundreds of millions of dollars for parent company Disney along the way. Thor: The Dark World is another worthy addition to the set, and will hopefully lead to more exciting blends of science fiction, fantasy and superheroics down the line.
Posted by Grant at 8:54 PM