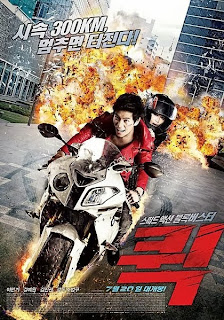 Former bike gang leader Han Ki-Su (Lee Min-ki) works as a motorcycle courier. One day, when unwillingly hired to escort his ex-girlfriend Chun-shim (Kang Ye-won) to a pop concert in which she is performing, he finds himself the unwilling accomplice of a mysterious figure who forces Ki-Su to deliver one bomb after another with the police in hot pursuit.

Quick was a smash hit in South Korea back in 2011, and thanks to Madman Entertainment it is now available on DVD in Australia. It's a very silly film: high on melodrama, over-the-top explosions and exaggerated performances. How much you enjoy the film likely depends on how you enjoy this sort of South Korean entertainment. It's a film culture that's very distinct, and often difficult for uninitiated viewers to digest.

For my part the film doesn't succeed. This is largely because it's just a bit too silly for me to take seriously, it's more than a little unfocused, and it has some fairly dubious gender politics at work.


The silliness is not necessarily a fault of the film. As I've mentioned in the past, South Korean entertainment generally leans towards the exaggerated, and if a film's going to be a comedy of any kind then it's par for the course for that comedy to be as broad and obvious as possible.

The lack of focus is definitely the film's fault, however: the screenplay simply isn't tight enough for this kind of fast-paced, string-of-explosions storyline. The characters are drawn very thinly, and the dialogue isn't particularly funny or engaging. It all simply hangs there, looking like what it almost certainly is - a framework for linking together car chases and explosions.

Kang Ye-won is saddled with a very irritating character, with Chun-shim shrieking and fretting her way through the movie like an outdated damsel-in-distress. It's the 21st century. I expect more from my female protagonists.

Quick is by no means the worst film I've seen this year (that's probably Silent Hill Revelations) but it's certainly not a good film. Unless you're desperate to watch every Korean action flick that you can, it would be safer to simply avoid this one.
Posted by Grant at 9:55 AM