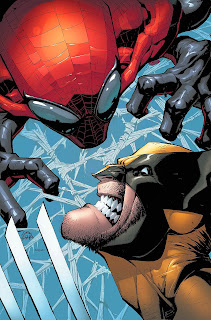 Marvel have released their solicitations for February 2014, and it reveals a bunch of surprising relaunches. They're not surprising in the sense of "series X is ending?", more a surprise that "series X is ending already?". The month sees the publication of Wolverine #1 (the previous volume, ending in January, ran for only 13 issues), Fantastic Four #1 (last volume? 16 issues), The Punisher #1 (it previously ran for 16 issues), X-Force (17 issues), She-Hulk #1 (38 issues, but to be fair that was back in 2009) plus a miniseries for The Winter Soldier (last monthly series ended in August after 19 issues), and fresh launches of New Warriors, Ms Marvel and Loki: Agent of Asgard.

It used to be that the longevity of a comic series was a badge of honour, and a sign of a long-running and healthy title. In today's comics market it's a significant drag, as books launch huge and then haemorrhage readers for the next 12-24 months. Five years ago the three highest-numbered titles were Action Comics #871, Detective Comics #850 and Superman #268. By October 2013, the three highest-numbered issues were Archie #649, Betty and Veronica #268 and Sonic the Hedgehog #254. Marvel and DC have abandoned long runs in favour of short-term gains.

Considering the gains, it's difficult to fault them for this decision: it does lead me to one conclusion, though. Is there actually a market for ongoing titles any more? What we're probably looking at in the next few years is less regular series and more miniseries masquerading as monthlies. There's no reason in the current context for a superhero book to run more than 12 issues before it gets relaunched and renumbered. We might miss the high numbers on some of our favourite books, but I'm not sure there's a compelling reason for them to ever come back.

Under the cut: a big week, with reviews of All-New X-Men, Batgirl, Batman, Cataclysm: Ultimate Spider-Man, Doctor Who: Prisoners of Time, FBP: Federal Bureau of Physics, Katana, Manhattan Projects, Manifest Destiny, Star Wars, Three and Umbral. I still don't have copies of Worlds' Finest, Thor: God of Thunder or last week's Batwing, but will endeavour to review them at some point soon.

The young X-Men of the past arrive at Cyclop's new base of operations - very cleverly located, by the way - in the aftermath of Battle of the Atom. While I still don't buy the reasons for them moving away from the Jean Grey School, Bendis fills this issue without great character moments and dialogue that I don't really mind. The scene between Jean and the Cuckoos is pretty hilarious, in fact. Despite a few reservations over the new direction, I'm willing to trust Bendis and see where this goes. (4/5)

DC are beginning to get rather sneaky with their cover prices. I note that they've quietly upped the price of Batgirl this month from $2.99 to $3.99, and Batman continues its unannounced run at $4.99. It feels like dirty tricks. This is a perfectly enjoyable story about the teen Barbara Gordon during the Gotham mega-storm of "Zero Year", but to be honest it feels like it should be an annual or a one-shot rather than an issue of the regular monthly comic. Gail Simone's "Batgirl: Wanted" arc has been abruptly suspended in favour of this issue, and all things being equal I think I'd have preferred the conclusion of that arc for $2.99 rather than a segue into the past for a dollar more. (3/5)

Gotham City is suffering a total blackout with a mega-storm on the horizon, so I suppose it's appropriate that the cover to this issue is entirely black - it's a very sleek, stylish look. Inside, we get our first "Zero Year" look at Pamela Isley (aka Poison Ivy), as well as what I think is an entirely new villain for Batman to face. I like that despite re-telling Batman's origin, Snyder is still finding room to introduce new characters and ideas. A back-up strip even gives us an appearance by the very young Harper Row, who's been popping in and out of the book since the New 52 kicked off. Once again, a flawless, stylish, immensely enjoyable Batman comic. (5/5)

Last month Ultimate Comics Spider-Man wrapped up to make way for this - one of several tied-together miniseries about the planet-eater Galactus descending upon the Ultimate Earth. Don't be fooled, however: for all intents and purposes this issue is basically the next issue of Ultimate Comics Spider-Man. We get the emotional responses to the finale, some character development and a strong push towards the next phase of Miles Morales' story. This is no bad thing. Plus Galactus turns up. (4/5)

Doctor Who: Prisoners of Time #11

The first half of this issue, in which the 11th Doctor finally starts working to track down Adam and rescue his past companions, is pretty decent. Then they meet, and it turns into silly monologues seasoned with a pointless cameo appearance, and all the momentum of the first half simply dissipates away. There's one issue left, in which I assume the Tiptons are going to insert all of the plot. Now we're this close to the end it's pretty safe to call this series out as a massive missed opportunity: a 12-part epic storyline featuring all 11 Doctors could have been outstanding, but instead we've been given this flaccid treading-of-water for the entire year. I'm not sad IDW have lost the Doctor Who license. I hope whoever gets it does better with it than they have. (2/5)

After the first story arc, this issue takes a step back and provides the reader with some much-needed backstory and context. While I don't think this is by any stretch a great comic book series, it is thus far an entertaining one - and at only $2.99 per issue it's better value than a lot of what's on the shelf. There's promise here, huge promise, and we just need to wait and see if that promise can be fulfilled in the coming months. (3/5)

Turns out that this is the penultimate issue of Katana, which is no great surprise: it never really found a readership, and those readers it did find have been departing in droves with every passing issue. While the plot of this issue is enjoyable enough, it's let down by some pretty dreadful artwork. This really does feel like DC cancelled the book, cut their losses and found someone to draw the last two issues as quickly and inexpensively as possible. (2/5)

The Manhattan Projects team are under lock and key as Oppenheimer continues his violent takeover of the operation, with his focus firmly on Project Vulcan. Meanwhile flashbacks to Einstein and Feynman's inter-planetary expeditions turn out to have a frightening relevance to the present crisis. This comic book is just a madcap panic of ideas, taking a spray can to an entire century's worth of brilliant scientists and transforming them into ridiculous super-villains. I adore it. This is a great, fast-paced issue with a last-page kicker that has me desperate to find out what happens next. I adore this comic. More people should read it. (5/5)

They're not very known here in Australia, but Lewis and Clark are household names in the USA thanks to their 1804 journey from the colonies of America's east coast to undiscovered lands in its west. Manifest Destiny puts a wonderful wrinkle onto that piece of history: what if there was a secret mission involved in their journey? What if the west was full of monsters and the supernatural? This is a solid first issue with particularly strong artwork by Matthew Roberts, and is certainly intriguing enough to make me want to read further. (3/5)

The second story arc is on the verge of completion, and it continues to present a brilliant and energetic take on the classic Star Wars trilogy. This issue mostly comprises one space battle between the Empire and the Rebel Alliance, yet Wood still manages to include a lot of moments of character and a lot of developments in plot. We're just over two years away from the next Star Wars movie, and at the moment there isn't a better way for fans to tide themselves over than this comic. (4/5)

Three runaway slaves, having just killed their overseers, go on the run - with Spartan warriors dispatched to hunt them down. This is an impeccably research miniseries, presenting a view of Spartan culture far more accurate that the one-sided, idealised polemic of Frank Miller's 300. I particularly loved the offhand references to homosexuality among the Spartan lords, something I can't imagine Miller putting into his graphic novel in a million years. This is a great historical drama and if anything this second issue is better than the first. (4/5)

A few years back Johnson and Mitten created Wasteland, an absolutely astounding post-apocalyptic science fiction comic from Oni Press. They've reunited now for Umbral, which tackles high fantasy in much the same method: strong characters, great dialogue, an overall respect for the tropes and standards of their genre but with a lot of great inventive work in between. This is a brilliant first issue, probably the best since Bedlam #1 last year, and benefits hugely from the extra length. So if you're interested in a comic about kingdoms, thieves, magic and shadow monsters that hide in the dark, then Umbral is the comic book for you. This issue even has a map, for goodness sake. (5/5)