Doctor Who: "The Day of the Doctor" 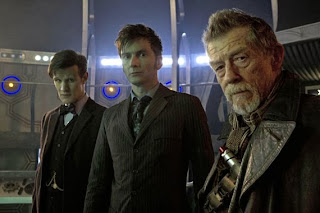 Underneath London's National Portrait Gallery the Doctor and Clara investigate a mystery by the invitation of Elizabeth I. More than 400 years ago another Doctor fights to defend the same Elizabeth I from an alien invasion. And on the final day of the Time War, yet another Doctor prepares to active the ultimate weapon and wipe out the Daleks and the Time Lords forever.

"The Day of the Doctor" is the Doctor Who 50th anniversary special. For the 10th anniversary (well, actually the ninth, but that's complicated) the production team produced "The Three Doctors", bringing back William Hartnell and Patrick Troughton alongside Jon Pertwee to fight Omega - an ancient Gallifreyan menace. For the 20th anniversary they produced "The Five Doctors", a special 90 minute special bringing back five Doctors (sort of - again, it's complicated) in an adventure against more evil Gallifreyans. The series was off the air for the 30th and 40th anniversaries, so "The Day of the Doctor" is the series' first proper anniversary special in 30 years. No pressure.

"The Day of the Doctor" tells two stories at the same time. The first, in which Zygons in the 16th and 21st centuries attempt an invasion of the Earth, is a bit of a smokescreen for the real story: the Doctor coming to terms with his actions at the end of the Time War.

Let's quickly cover the Zygon plot, then. It's great to see the Zygons back. They only appeared once before, fighting Tom Baker's Doctor in "Terror of the Zygons", but their iconic design and a great script back in 1975 guaranteed they'd be remembered for decades. I was very happy to see that the new design held very close to the original - generally when a 20th century monster gets redesigned I'm disappointed, whether it's the Daleks, the Silurians or even the Macra. In this case I thought they did a subtle and respectful job of updating them.

It was also great to see UNIT back. I'm a big fan of how Steven Moffat's team has re-envisaged this classic institution, particularly including Kate Lethbridge-Stewart as its head. Having a scientist in charge of UNIT makes sense, and Jemma Redgrave does a fantastic job in the role. She should be making an annual appearance from hereon in. It was also great to see Ingrid Oliver as the asthmatic science officer Osgood (daughter of Osgood from "The Daemons"? There's certainly a resemblance). Oliver is a talented comedian and actor, and I'd be happy to see her back as well. In fact, I'd be happy to see her as a companion.

In fact let's be honest: I'd currently be happy to see anyone as the Doctor's companion other than Jenna Coleman, an actress who seems entirely incapable of speaking her lines. She rushes her delivery, and garbles her words, and more than once I completely missed what her character was supposed to be saying. Clara seems like she could be a great character, and I love the dynamic she has with the Doctor - she has a job, and a comfortable life in London, and simply sneaks off occasionally with him for an adventure - but Coleman's performance is ruining it completely.

We never actually see the Zygon plot end - once it's served its purpose of bringing three incarnations of the Doctor together and setting up the War Doctor's anguish over ending the Time War, it sort of quietly goes away. I can imagine this might annoy some people, but I didn't have a problem with it. Moffat writes the Zygon storyline up to the point where the logical conclusion is in sight, and then wisely saves time by moving on. We don't need to see what happens next, because we've seen 50 years' worth of Doctor Who and know how it will end.

So: onto the actual storyline of "The Day of the Doctor". On the final day of the Time War, the Doctor breaks into Gallifrey's Omega Archive and steals "the Moment", a Gallifreyan weapon so powerful it gained sentience and a sense of morality. To help him decide whether or not to activate it - and kill all Daleks and Time Lords at once - the Moment (cleverly personified by Billie Piper, getting her into the special without bringing back Rose) shows him a glimpse of his future, Christmas Carol-style, and into the Zygon adventure with his 10th and 11th incarnations.

John Hurt is exceptional as the War Doctor, a nameless, melancholic figure wedged between Paul McGann's 8th and Christopher Eccleston's 9th Doctor. It is such a striking and bold idea to insert a previously unknown version of the Doctor into the series. I'm sure some fans of the series are screaming that Steven Moffat has 'wasted a regeneration', but I think we can safely agree that those fans are pretty stupid. For one thing, there's clearly not a problem with wasting regenerations since a tantalising Peter Capaldi cameo gives the series its 13th Doctor and a beautiful scene with Tom Baker at the very end gives it its 14th. That's ambition for you: we might have had five Doctors in 1983's special, but including all the cameos and re-purposed footage this time around we got fourteen.

John Hurt does a fabulous job of playing every long-term fan of Doctor Who whenever they watch the modern program. He's irritated by his later incarnations' personalities, their over-the-top uses of their sonic screwdrivers and their constant use of phrases like 'timey wimey'. At the episode's climax, when Smith shouts 'geronimo!', and Tennant 'allons-y!', and all Hurt can manage is a muttered 'oh for God's sake', I wanted to reach into the screen and hug him.

The episode's climax is marvellous. It's a supreme act of misdirection, having spent the entire episode showing the War Doctor see his own future and decide whether or not to activate the Moment and commit genocide, only to give the Doctors a way out after all. He doesn't destroy Gallifrey, but rather saves it. It's a repeat of Moffat's marvellous 2005 story "The Empty Child", in which nobody dies. Here people certainly die, but billions of Gallifreyans get snatched out of the war and hidden away when previously they had been consigned to oblivion.

This climax marks Moffat's second outstanding idea. It would have been clever enough to save Gallifrey, let the War Doctor assume his rightful title and his future self to resolve once and for all his guilt over committing genocide. What Moffat does is give Gallifrey back to the Doctor but hide it somewhere outside of time and space, tantalisingly out of reach.

For the first 50 years the Doctor has been a character who's running away, starting with his original flight from Gallifrey, and even post-2005 he's been running away from his past and the horrors of the Time War. What Moffat has done is taken a central tenet of Doctor Who and radically turned it on its head. He isn't running away any more. He's still alone, of course. He's still going to wander the universe having adventures and righting wrongs, only this time he's not running away from Gallifrey but instead looking towards it. This wasn't just an immensely heart-warming end to a great episode - it's the capstone of the entire first 50 years of the series.

And this new direction is launched in such a beautiful fashion. First there's Tom Baker's unexpected cameo as some far future incarnation of the Doctor, pitch-perfect and so utterly delightful. Then there's the 11th Doctor's final dream, standing on a cloud with all of the other Doctors, watching Gallifrey loom above him. And he smiles with such wonderful, childlike hope. There's been a strong character arc running through the Doctor's character for 2005, and now that chapter is gently and brilliantly closed.

There's a lot else I could rave about including the use of the original opening titles, the vastly improved theme music at the end, the visual impressive three-dimensional Time Lord paintings, and so on, but to do so would be to rabbit on when I don't need to. Despite a shaky start "The Day of the Doctor" is a simply outstanding episode of Doctor Who. I laughed. I smiled. By God I nearly cried.
Posted by Grant at 4:30 PM