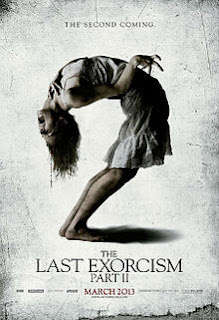 I should probably admit from the outset that I am an absolute sucker for movies about demonic possession and exorcists. Whether it's The Exorcist, or The Exorcist of Emily Rose, or indeed The Last Exorcism, there's something about the blend of drama, horror and Christian theology that is very addictive. It seems to generate atmosphere, tension and drama.

I really enjoyed The Last Exorcism, a faux documentary-come-found footage thriller in which a disillusioned Catholic priest brings a camera crew along to expose the rites of exorcism as fake - only to find himself having to conduct a real one. Some of the film didn't work, particularly in its conclusion, but overall it was a nicely entertaining and regularly scary little horror movie. It was also a pretty healthy box office hit, leading inevitably to a sequel: The Last Exorcism: Part II.

Part II picks up pretty much where The Last Exorcism left off, with Nell Sweetzer - who was possessed in the original film - found by the authorities and released into a halfway house for teenage girls. There she starts getting stalked by cultists, exhibiting supernatural behaviour and generally doing whatever it is you do when you're the star of a horror sequel. Crucially, this film is not presented in documentary or found footage form, and is instead written and shot as a conventional narrative feature.


I feel as if we've all been here before: in 2000 Artisan Entertainment released Book of Shadows: Blair Witch 2, a conventional narrative sequel to 1999's smash hit found footage thriller The Blair Witch Project. The core problem of Book of Shadows is the same core problem of The Last Exorcism: Part II. Both films are sequels to sharp, low budget and immediate horror movies, and by rendering the follow-ups in a more traditional fashion they've robbed themselves of the suspense that the found footage medium generates. Without the benefit of the found footage - which gives films an aggressively singular point of view, which is great for horror movies - both films must rely on their stories and their performances. Neither film is up to that task.

The Last Exorcism: Part II is nowhere near as problematic as Book of Shadows, but it is a deeply mediocre and ultimately unnecessary sequel. At its centre is a very strong performance by Ashley Bell, but one strong performance isn't enough to save the film from a script that's littered with stereotypes, humdrum jolts and scares and by-the-numbers direction. It also features a particularly lazy conclusion.

If, like me, you're a sucker for exorcist movies, then there's just enough in this film to justify watching it. If you couldn't care less for exorcists and exorcisms, it's best to pass this one over. I only hope its lacklustre box office has saved us all from Part III.
Posted by Grant at 9:45 AM