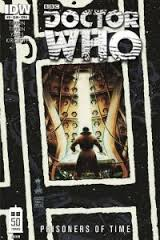 It's been the 50th anniversary of Doctor Who this week (more on that in the next few posts), and that makes it the perfect time for IDW to publish the final instalment of their 12-issue maxi-series Doctor Who: Prisoners of Time. It's time for celebrations, and as they've lost the license to produce Doctor Who comic books, it acts very much as the climax of their six-year run as well.

This issue, I swear - it's like a how-to manual on writing the most trite and unreadable Doctor Who 50th anniversary story you'll ever read. Squeezed into 20-odd pages are 11 Doctors, all of their companions, an army of Autons, the Anthony Ainley Master and a middle-aged Adam Mitchell from "Dalek" and "The Long Game". Quite why the Tiptons thought that Doctor Who needed to be celebrated by 11 character actors having a mass fistfight with some Autons is beyond me - all I know is that this is very possibly the worst single issue of a comic I've read this year. In case anyone from IDW is reading this: this sort of comic is why you're not allowed to publish Doctor Who any more. (0/5)

Under the cut: reviews of Batman and Two-Face, Batwing, Daredevil, Doctor Who: Prisoners of Time, He-Man and the Masters of the Universe, The Wake, Wonder Woman, Worlds' Finest, X-Men Legacy and Young Avengers.

I've said this many times, but once again it bears repeating: while the focus has recently been on Scott Snyder and Greg Capullo's outstanding lead title Batman, and Grant Morrison stole some limelight wrapping up Batman Incorporated, Tomasi, Gleason and Gray have been quietly working away on this stunning and consistently strong Bat-comic ever since the New 52 started. This issue continues fleshing out the new origin for Two-Face. It's not something that particularly needed rebooting, but so far they're doing a great job of it. I don't think I've ever given this comic a score of 5/5, but almost every month I give it 4.5: that's telling, and that's consistency. (4/5)

This issue was delayed by a shipment error to my local comic shop, so I figured I'd drop it in here. It's a Zero Year tie-in, so we get to see Luke Fox's experiences in high school during the lead-up to Gotham's mega-storm six years ago. It's a very cliched story about Luke's nerdy friend in high school being bullied so much that he becomes a super-villain. It's pretty awful stuff, and it's made even harder to like because it's about Luke Fox. Really: I do not care. Palmiotti and Gray, whose writing I usually like, have replaced a Batwing who was a former child soldier struggling in near-impossible conditions in central Africa, with a rich kid who's not particularly nice duplicating Batman's activities in Gotham City. There is honestly no reason for Batwing to exist any more. Plus it cost an extra dollar because it was a Zero Year tie-in. (1/5)

I swear I'm usually 100% behind Mark Waid's Daredevil, but for some reason this current storyline - teaming Matt Murdock up with a bunch of Universal-style monsters - is falling flat for me. I simply don't care about these characters. There is some excellent character work going on, particularly a rather foreboding dream sequence at the beginning, but overall I'm just not feeling the love this month. It's still a great comic, but I do think this issue is a drop in quality. Hopefully a temporary one. (3/5)

He-Man and the Masters of the Universe #8

Writing-wise this is shaping up to be the Masters of the Universe comic I wanted in the first place: it takes the characters from the TV cartoon and action figure line and re-envisages them into a grittier, more serious high fantasy adventure. In terms of art I'm still on the fence. It's a weird sort of curvy, sketchy, deliberately-messy aesthetic that could potentially work for some books, but I'm not certain it works for this book. All in all, however, I'm happy. (3/5)

Events take the mother of all right-turns at the end of this issue, and the pages leading up to that turn are gripping and effective. For the first half, The Wake has been a tense, ratcheted-up sci-fi thriller, with my only criticism being that it felt like a movie pitch disguised as a comic book. Well that criticism is out of the window now, and the second half of the book (commencing early next year) looks like it's going to be something completely different and much larger in scope. This is one of the best Vertigo titles in a long while, and this particular issue is the best since the first. (5/5)

Further Godly politics and manuevring in this issue of Wonder Women, when Strife comes to visit Diana and her companions, while Cassandra also makes moves on her own agenda. Between Diana, Strife, Cassandra, Hera, Zola and others, I think Wonder Woman may currently have the highest proportion of female characters in American superhero comics (with the possible exception of Brian Wood's X-Men). This Vertigo-esque take on the character continues to impress, with a great cliffhanger leading into #26. (4/5)

While I do love the cover to this issue - and to be honest all the covers to this comic have been great - I have to admit the heavy narration and "mindscape" sequences did lose me a bit. The story is moving forward, and certainly this issue leaves us in a more interesting position that the one in which it started, but on its own merits I wasn't too impressed this time around. I suspect this is an issue that will read better in the trade paperback than on its own. (2/5)

Things get very climactic. I'm not sure what I think of this series, now that we seem to be already nearing its conclusion. It started off incredibly strong, but it feels a little like it's dragged a bit too much. 12 issues in and we're essentially still following the same storyline. Somehow it's all feeling as if it could have been aggressively tightened up and turned into a six-issue miniseries instead. Still, there's plenty of great dialogue and moments of characters, and McKelvie's art is sensational as always. I just want more. (3/5)