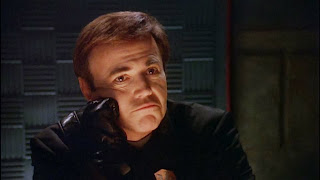 Bester, everybody's favourite Psicop, returns to Babylon 5 to put a stop to the trade in "dust", a dangerous and illegal narcotic that boosts the latent telepathic powers of ordinary humans. Some of the dust has found its way into the hands of G'Kar, who uses it to enact revenge on Londo Mollari.

Alfred Bester, played by Star Trek veteran Walter Koenig, has made quite a few trips to Babylon 5 now. This episode features Koenig's best performance yet, and also I think the best material he's been given. He's funny, deliberately provocative and wonderfully entertaining. It would be easy to consider him a straight-up bad guy, but this episode demonstrates that he's not quite as clear-cut as that. It's not that he's evil, or amoral - he basically works along a different type of morality to the station's primary crew. So first and foremost I liked this episode because Bester was written and performed in such an entertaining fashion.

The episode's other key plot involves G'Kar taking some dust and using it to psychically interrogate Mollari about the Centauri invasion of the Narn homeworld. As I've noted time and again, Babylon 5 generally hits its best notes when it's focused on Londo and G'Kar. This episode doesn't disappoint. It pushes their arcs forward considerably: G'Kar knows how deeply involved Londo was in the war, and that he had help from an outside power. G'Kar also has an unexpected religious epiphany, one that changes him considerably. By episode's end he is willingly in the station's prison, atoning for assaulting and kidnapping the Centauri ambassador, and for the first time since the series began seems to be at some kind of emotional peace.

Of course the episode makes it very clear that the only reason G'Kar had this religious experience is because the Vorlon ambassador Kosh psychically reached into his head and put the experience there. Like Bester, Kosh is not an easy character to pigeonhole: is he good, evil or on a third side all of his own? The longer the series runs the less clear it seems to be.

This is a strong, entertaining episode that doesn't put a foot wrong and contains a number of great highlights. This is the Season 3 I remember, and hopefully it's a sign that the season's quality is beginning to stabilise. We're six episodes in, three have been good: the season's cumulative score is back up to 50%.
Posted by Grant at 9:18 AM