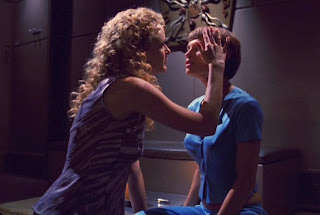 Captain Archer heads to an alien marketplace in an attempt to uncover more knowledge about the elusive Xindi. There he rescues a runaway slave girl - only to discover that she may be more of a danger to his crew than he thought.

I honestly don't know what happened in the three month break between Enterprise's second and third seasons. For the first two seasons I was quite surprised at how entertaining the series was, and was reevaluating my harsh criticisms of it when it first aired on television. Now I'm up to Season 3, and its year-long story arc of hunting down the Xindi before they destroy the Earth, and the script quality has gone out of the window. The heart is gone, and it's really becoming a chore to watch.

It's trash: awful and simple, and almost purely constructed for the adolescent male gaze that the production team clearly believed was their target market. I've been a Star Trek fan for years, and I've known all kinds of fans: old ones, young ones, male, female, adolescent and mature. As a franchise, it should be better than this. Star Trek: Enterprise should be better than this.

We're four episodes into the season, and precisely one has been good: really, Enterprise, what the hell happened during the three-month break? You're at 25% and falling.
Posted by Grant at 8:57 PM