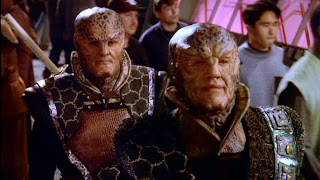 In the third episode of Babylon 5's third season: an alien probe threatens to destroy the station, G'Kar struggles to control the Narn community when his Centauri-appointed replacement arrives, Londo finds Vir a new role to perform, and Garibaldi challenges Dr Franklin about his growing stim addiction. Before anything else, it's important to mention that this episode has a horrible pun in its title.

It's easy to notice a general trend in Babylon 5: the storylines based around the humans are generally trite and unconvincing, while the storylines based around the non-humans are generally intriguing and dramatic. I'm trying to work out why that is. Are the actors (Mira Furlan, Peter Jurasik, Andreas Katsulas, et al) simply better performers? Does Straczynski simply write them more effectively? Or is it something so simple as the weird alien makeup making simplistic characterisation and stereotypical plots seem fresher and more interesting? I'm not certain of the reason, but what I do know is that in this episode - as in many others - the episode drags when it's focused on the humans and it sings when it's focused on the alien ambassadors.
Londo gets two great scenes. The first sees him at perhaps his most cruel and unpleasant yet, as he brutally goads and insults the station's new Narn representative. The second sees him negotiate with Delenn to have Vir sent to Minbar. It's perhaps the saddest element of the season thus far: Londo needs Vir, and without his influence things can only get more screwed up for him.

G'Kar is faced with the dilemma of staying on the station - and potentially consigning the families of the Narn around him with arrest, imprisonment and torture, or returning to Narn to almost certain execution. Andreas Katsulas plays this torment well: G'Kar continues to be the series' best character.

Meanwhile an alien probe threatens to blow up the station unless the crew submit answers to a range of difficult scientific questions. It's a reasonable enough plot I suppose, but would feel more in place in a 1960s episode of Star Trek than a 1990s drama broadcast alongside The X Files and Deep Space Nine.

Then there's Franklin's growing stim addiction, with comes across like a preachy after-school special. This kind of plot is very difficult to do, because it's very easy to slip into stereotype - and Straczynski slips all the way here. It's not helped by Richard Biggs being a fairly limited actor.

Overall this is a good episode with some tedious bits and a silly title. That's a yes from me, bringing Season 3 up to 66%.

It was a nice touch for Sheridan to reunite briefly with Ta'Lon, the Narn whose life he saved all the way back in "All Alone in the Night".
Posted by Grant at 7:45 PM