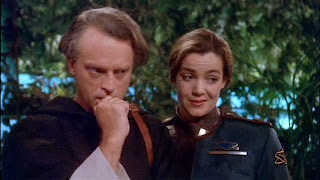 In "Passing Through Gethsemane", Lyta Alexander returns from Vorlon space to work for Ambassador Kosh, sparking suspicions among the station staff. Meanwhile one of Brother Theo's monks struggles with hallucinations and forgotten memories, leading him to discover a shocking secret about his life before the brotherhood.

J. Michael Straczynski has referred to this episode as his "Twilight Zone" script, and it's not difficult to see why: like a good episode of The Twilight Zone, "Passing Through Gethsemane" presents us with a simple but effective core concept and a very neat little kicker at the end. The episode is also notable for its relatively high profile guest star (One Flew Over the Cuckoo's Nest's Brad Dourif), and for reintroducing Lyta Alexander (Patricia Tallman) to the series. This is an episode with good elements and bad, so let's talk about one and then the other.

At the centre of the episode we have the story of Brother Edward (Brad Dourif), a relatively naive monk working to record the religious beliefs of alien cultures on the station. He is warm, supportive and credulous, yet begins to suffer from hallucinations and flashbacks to an earlier life. It turns out that Edward is actually a convicted murderer, who some years ago was sentenced to have his mind wiped and his personality transformed to make him contribute to society for the rest of his life. Dourif, an outstanding actor, sells this character extremely well, and Straczynski does a great job incorporating Edward's Christian beliefs into his inner conflict (the biggest reference is in the title, and explained in a conversation with Delenn). I don't really want to delve too far into this storyline because it really is best viewed cold - I think it's one of the better things Straczynski has written for the show.

I also like the wonderfully mysterious way in which Lyta Alexander has been returned to the series. The episode's final moments are particularly striking: what the hell has happened to her? It's great, creepy foreshadowing.

On the other hand there's the problem with Garibaldi and Sheridan. Early on Garibaldi and Delenn see a newscast reporting on a convicted murderer being sentenced to mind-wipe (important foreshadowing for later in the episode). Garibaldi enters into a monologue about how much he misses the electric chair and capital punishment. This sounded false to me, and didn't match the pragmatic, reasonable character that I had seen in the first two seasons. It's also relatively difficult to like a character who enthusiastically wishes that convicted criminals could be murdered by the state, and who criticises mind-wiping (a horrifying concept) as weak and insufficient punishment.

Later on Garibaldi and Sheridan drag a Centauri citizen into an interrogation room, hold him down, put a black bag over his head and then use Lyta as a torturer to extract plot-critical information out of him. Well, I say plot-critical - even with information gained via torture they're still too late to save the day, so I guess all three actively engaged in the torture of a foreign citizen without charge or justification for nothing. Not only is this scene kind of unbelievable (is Ambassador Mollari really going to let the torture of a Centauri citizen lie?) it severely damages the characters. They're not nice people any more. I don't back them like I did an episode ago. I don't like them like I did an episode ago. They used to be heroes. Now they're just people who think torture is acceptable.

It's a pity: the Brother Edward stuff is fantastic, but the torture just ruins the whole episode for me. I'm sure many will disagree - this is a regularly praised episode of the series - but I give this episode the thumbs-down. That leaves Season 3 with two good episodes out of four, or 50%.
Posted by Grant at 9:34 AM