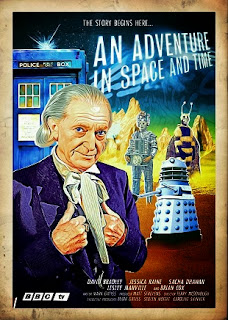 While the majority of Doctor Who fans eagerly awaited the broadcast of "The Day of the Doctor", some of us were actually anticipating a very different production. An Adventure in Space and Time, written by Mark Gatiss, recounts the origins of Doctor Who itself. It is a biopic, or a docudrama, whatever term you prefer I suppose, and tells the story of several disparate creatives coming together in 1963 to make a science fiction serial for the BBC.

I've always felt that the early days of Doctor Who would make great material for a film of some kind, mainly because the key players were such interesting people. You had Sydney Newman, an abrasive Canadian recently installed as Head of Drama for the BBC and upsetting the establishment with his brash North American ways (not to mention he'd just finished up at ITV - commercial television). Newman has a basic idea for a time-travelling science fiction series, and to bring it to fruition he hires his former production assistant Verity Lambert as producer. This act made Lambert the first female television producer in history, and she in turn hired Waris Hussein as director - the BBC's first Indian director - and character actor William Hartnell as the star.

These are the characters that Gatiss bases his script around, which is a smart move. With only 75 minutes to work with, and a narrative that runs from 1963 to 1966, he has distilled the making of Doctor Who into a story between these four people - and into a story about William Hartnell in particular. Hartnell was by all accounts a difficult and occasionally actively unpleasant individual, and Gatiss pulls no punches in showing this. Despite some outstanding performances in British feature films over the years (I personally loved him in Brighton Rock) Hartnell had by 1963 been typecast as either gangland crime bosses or army sergeant-majors. Playing the Doctor in Doctor Who not only gave him a startlingly different role to play, but suddenly made this gruff, irascible 50-something actor a hero to millions of children across Great Britain. This change in status brings about a remarkable change in Hartnell, one made all too tragic when developing artereosclerosis threatens to take it all away from him. What begins as a charming retelling of Doctor Who history soon transforms into a heart-breaking tragedy, in which Hartnell both establishes a British institution and simultaneously loses it. I'm not ashamed to say I cried; I suspect a lot of viewers did.

Not only is Space and Time the best thing Gatiss has ever written, it's also impeccably cast. It's easy to see why David Bradley was cast as Hartnell, since he bears an uncanny resemblance to him, but he also brings an immensely nuanced performance. He has a deceptively tricky job, since he not only has to play Hartnell in all his argumentative, stubborn and often quite rude glory, but he has to make him a sympathetic protagonist at the same time. He achieves this and then some, and his immensely vulnerable moment after being dropped from the role of the Doctor, sobbing inconsolably in his living room, is a masterpiece in screen acting.

Jessica Raine is similarly outstanding as Verity Lambert. Again she bears a close resemblance to the real woman, and also delivers a wonderfully layered and believable performance. She impresses me in everything I see her in; I honestly think she's one of the best actors under 40 in Britain today. Of course she recently appeared in Doctor Who as psychic investigator Emma Grayling, and I can't be alone in desperately hoping she returns to that role soon. (To be honest I desperately want her to be the next companion.)

Sacha Dhawan and Brian Cox both have smaller supporting roles as Waris Hussein and Sydney Newman, but both give 100% and are utterly believable. Terry McDonough directs the film with a minimum of flair, concentrating instead on the characters and the performances. He's done a fabulous job.

Of course what is so delightful for Doctor Who fans is the film's recreations of all of the sets, costumes and performances of Hartnell-era Who. The original TARDIS console, sets from "Marco Polo", original Daleks and Menoptera from "The Web Planet" all get a much-appreciated look-in, as do snippets of dialogue from a number of stories. Even better than that are all the more subtle nods to Doctor Who history: Gatiss cleverly slips in numerous references to dialogue and scenes from the entire 50 year history of the series, and a number of original 1960s cast members make neat little cameo appearances throughout. There's even a reference to the original Doctor Who spin-off novel, as a grieving Hartnell stops his car to stare at a police box standing in the fog on Barnes Common.

One contentious moment during the climax sees William Hartnell preparing to shoot his final scene as the Doctor. He rests his hands on the TARDIS console, looks up and suddenly sees current series star Matt Smith opposite. They share a moment, Smith gently smiling with thanks and pride, before the scene continues. It's the sort of moment you only tend to get in British television, because with all due respect to TV drama from other countries it's only ever been British TV that's had the boldness of vision to do these sorts of thing. It's a moment of magical realism from the broadcaster who gave the world Dennis Potter, and I suspect viewers are either going to love the moment to bits or think it's the most appallingly silly intrusion they've ever seen. I'm in the former camp: I think it's a marvellous way to show that, while Hartnell's participation ends here, the narrative he has helped to establish will go on forever.

What drawbacks that exist are minor: the opening credits are bizarrely cheap-looking, while Reece Shearsmith is bizarrely unconvincing in a brief appearance as Patrick Troughton. All up, this is an exceptional piece of television filmmaking. I was concerned I might be too close to the source material to judge this film effectively, so I rewatched it with my wife, who - while liking Doctor Who - knows next-to-nothing about its origins. She agreed with me: this is a sensational film.

While I adored "The Day of the Doctor", I actually think that An Adventure in Space and Time is the better anniversary celebration. It's a fabulous film that I expect I shall watch many times in the future, and the perfect "thank you" note imaginable to Sydney Newman, Verity Lambert, Waris Hussein and particularly the grumpy, difficult, ultimately wonderful Bill Hartnell. 'No one's irreplacable,' he's told at one point in the film, except what the film actually does is prove that some people are. Troughton, Pertwee, et al, may all have played a Doctor, but only Hartnell played the Doctor. The original. Unparalleled. Irreplacable.
Posted by Grant at 10:02 AM